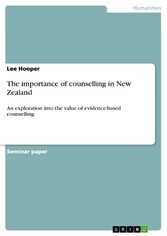 Seminar paper from the year 2013 in the subject Psychology - Consulting, Therapy, grade: 1, Massey University, New Zealand, language: English, abstract: As counselling often deals with those who are vulnerable it has been characterised as a high risk professional, and as such, controversy has often surrounded the effectiveness of its methodologies (Vacc, Devaney & Brendel, 2003). Because of the wide range of theoretical and practical approaches existing in the field, there is an ever-present need to critically analyse counselling's role in society, in conjunction with the evidence to support it. This essay will explore the scientific evidence surrounding counselling in New Zealand and analyse the significance, in terms of efficiency and effectiveness, that counselling has on individuals at the psychological and emotional level. This will be done by first giving a definition of counselling alongside pointing out the differences that make it distinct from other helping professions. Second, the nature and purpose of counselling will be outlined, alongside its intention and the prerequisites needed to facilitate interpersonal connection. Last, the value of counselling will be demonstrated by giving an analysis of the issues facing validation and then illustrating studies at both the international and national level to demonstrate clinical efficiency. It is concluded that the link between evidence-based research and counselling is one that requires stronger emphasis and through developing more counselling orientated research projects, a greater value will able to be placed on the role of counselling role within New Zealand culture.