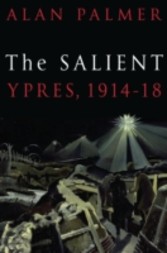 Ypres today is an international town of peace. But in 1914 the town, and the Salient, the 35-mile bulge in the Western Front, of which it is part, saw a 1500-day military campaign of mud and blood at the heart of the First World War that turned it into the devil's nursery. Distinguished biographer and historian of modern Europe Alan Palmer tells the story of the war in Flanders as a conflict that has left a deep social and political mark on the history of Europe. Denying Germany possession of the historic town of Ypres and access to the Channel coast was crucial to Britain's victory in 1918. But though Flanders battlefields are the closest on the continent to English shores, this was always much more than a narrowly British conflict. Passchendaele, the Menin Road, Hill 60 and the Messines Ridge remain names etched in folk memory. Militarily and tactically the four-year long campaign was innovative and a grim testing ground with constantly changing ideas of strategy and disputes between politicians and generals. Alan Palmer details all its aspects in an illuminating history of the place as much as the fighting man's experience.