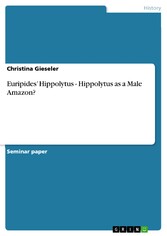 Seminar paper from the year 2007 in the subject History - World History - Early and Ancient History, grade: 1,0, Hawai'i Pacific University, course: Gender & Sexuality in the Classical World, language: English, abstract: Euripides' Hippolytus is the play has been generally acknowledged to be one of Euripides' finest [works], both for his skilled reworking of a traditional myth, and for the richness and complexity of its thought and language' (Mills, Euripides 7). The play offers space for various interpretations and especially the character Hippolytus is argued to appear as rather strange, and less clear than e.g. the character Phaedra (cf. Mills, Euripides 95). This paper aims to examine Euripides' play and find out in how far Hippolytus may function as a male Amazon in the play, and how he therewith provides a negative role model for Athenian men.1 At first, Apollodorus' and Euripides' account of the Hippolytus/Theseus myth will be discussed and then the character Hippolytus will be compared to Amazons such as the Lemnian women and the women of the Sauromatae. After that it will be shown how Hippolytus'inappropriate behavior does not only seal his own fate, but also affects the other characters' lives and leads to the disruption of their oikos. Finally, it will be revealed in how far the Hippolytus in Euripides play might have been a character that teaches Athenian men to stick to their society's rules.