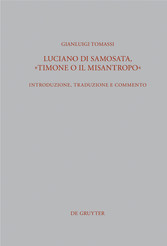 In the Greek literature of the imperial period, Lucian of Samosata is surely one of the most versatile and creative figures. Thanks to his Dialogues he became one of the most famous and appreciated ancient Greek authors, and his fame could only be compared toPlato or Plutarch's. Within Lucian's works, Timon is referable to the author's maturity and it is considered to beone of the best and most typical dialogues. Its modern success is evidentthrough several translations (such as Erasmus of Rotterdam's version) as well as a great number of works which are inspired by it (for example The Life of Timon of Athens by Shakespeare or The Misanthrope by MoliÃ¨re). The appeal of this Dialogue lies mainly in the protagonist, Timon of Athens, a genuine misanthrope's archetype, a powerful and interesting figure, capable of fascinating until today.