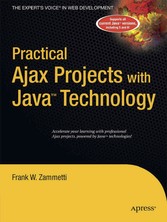 This book will save Java developers countless hours of development time by providing seven complete Ajax applications to learn from and adapt for use in their own projects. The applicaions include an online calendaring/scheduling system, a Flickrâ ¢-style photo gallery application, and an Ajax role-playing game. The book also details the set-up of a perfect Java/Ajax development environment in which to construct the applications; Java technologies covered include Apache, Ant, Ajax Tags, Struts, Prototype, DWR, Dojo, and more. This is the first book of its kind, aimed at Java/Ajax developers.


Frank W. Zammetti is a web architect specialist for a leading worldwide financial company by day, and a PocketPC and open-source developer by night. He is the founder and chief software architect of Omnytex Technologies, a PocketPC development house.He has over 12 years of 'professional' experience in the information technology field, and over 12 more of 'amateur' experience. He began his nearly life-long love of computers at age 7, when he became one of four students chosen to take part in his school district's pilot computer program. A year later, he was the only participant left! The first computer Frank owned was a Timex Sinclair 1000 in 1982, on which he wrote a program to look up movie times for all of Long Island (and without the 16k expansion module!). After that, he moved on to a Commodore 64 and spent about 4 years doing nothing but assembly programming (games mostly). He finally got his first IBM-compatible PC in 1987, and began learning the finer points of programming (as they existed at that time!).Frank has primarily developed web-based applications for about 8 years. Before that, he developed Windows-based client/server applications in a variety of languages. Frank holds numerous certifications including SCJP, MCSD, CNA, i-Net+, A+, CIW, MCP, and numerous BrainBench certifications. He is a contributor to a number of open source projects, including DataVision, Struts, PocketFrog, and Jakarta Commons. In addition, Frank has started two projects: Java Web Parts and The Struts Web Services Enablement Project. He also was one of the founding members of a project that created the first fully functioning Commodore 64 emulator for PocketPC devices (PocketHobbit).Frank has authored various articles on topics that range from integrating DataVision into web apps, to using Ajax in Struts-based applications. He is working on a new application framework specifically geared to creating next-generation web applications.