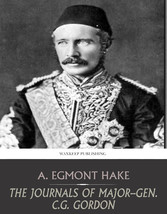 The Journals of Major-Gen C.G. Gordon

of: A. Egmont Hake

The Journals of Major-Gen C.G. Gordon

ONLY A VERY FEW words on my part are necessary in laying these Journals before the public.

On New Yearâs Day, 1884, General Gordon arrived at Brussels from the Holy Land, and at once commenced his arrangements with His Majesty the King of the Belgians to proceed to the Congo.

After visiting England once or twice, he left this country for Belgium and the Congo on the morning of the 16th January.

On the 17th January he was recalled by telegram. He reached London on the morning of the 18th, and was on his road to Kartoum upon that evening.

At this time, he felt quite confident of success, his instructions being that, by restoring the ancient families, whose territories had been seized by the Egyptian authorities, to their former power, he would be able to extricate the Egyptian garrisons and civil employÃ©s with their families, and remove them to Lower Egypt without difficulty.

During the voyage, however, from Brindisi to Port Said he prepared a Report, or Memorandum, dated 22nd January, in which, reviewing these instructions, he drew attention to some of the difficulties and complications which were likely to arise in carrying out the policy of Her Majestyâs Government, and asked for their support and consideration in case of his being unable to fulfil their expectations with exactness; and Colonel Stewart, in his separate observations of the same date, pointed out that, in view of eventualities for which it would be impossible to provide, the wisest course was âto rely on the discretion of General Gordon and his knowledge of the country.â

General Gordon, it will be seen, acceptedâand disclaimed the right to express any opinion of his own upon itâthe policy of leaving the Soudan. It appeared to him then that to reconquer that country and restore it to the Egyptian Government without securities for a just and honest administration would be iniquitous; that, on the other hand, to secure that object would involve an expenditure of time and money which could not be afforded, and consequently he then came to the conclusion that the Soudan might properly be restored to independence, and left to itself.

It will be seen, however, that he did not, after his return to the Soudan, remain long of that opinion. His heart warmed at once to the people whom he had faithfully governed, and whose affections he found, or at all events believed, were constant to him.

It is necessary here to explain that General Gordon had not intended to go to Cairo, but to proceed viÃ¢ Suakin and Berber. On the invitation, however, of Sir Evelyn Baring, he went to Cairo and accepted at the hands of the Khedive a firman appointing him Governor-General of the Soudan, without which he could have exercised no control over the Egyptian authorities employed in that province.

It was no part of General Gordonâs character to form a definite opinion from imperfectly known facts, and to adhere obstinately to that opinion, notwithstanding the evidence of altered circumstances and new elements.

We need not therefore be surprised to find that, on arrival at Abu Hamed, on the 8th February, finding the state of the country to be less disorganised than he had supposed, and adverting to the confusion which must ensue if all traces of the Khediveâs Government were suddenly effaced, he made the suggestion that a sort of suzerainty should be kept up, and that the chief officers of the Soudan should continue to be appointed by the Khedive, a complete and abrupt separation being thus postponed, although the control to be retained would be more nominal than real.

This feeling in General Gordonâs mind grew rapidly stronger as time went on. When he reached Berber he saw still more clearly the position he was in, and became impressed with the impossibility of carrying out his mission with credit, unless he was able to secure to the provinces of the Soudan some sort of government in the place of the one it was intended to withdraw.

Accordingly, upon the day of his arrival at Kartoum (the 18th February), General Gordon, after pointing out to the Government the difficulties that surrounded him, inasmuch as the garrisons and employÃ©s were to be removed, when all form of government would disappear, urged in the strongest terms he could employ that power should be placed in the hands of a single man, and that the man to be chosen should be Zubair Pasha.

Now it may be remarked that although Zubair was one of the most noted slave-hunters that had ever existed, yet his ability and influence could not be surpassed, while even the Khedive could not lay claim to any such proud descentâZubair being a direct descendant of the Abbassides.

This recommendation was rejected by the Government although renewed over and over again in a most persistent manner by General Gordon, backed up by Sir Evelyn Baring, who, on the 9th March, says: âI believe that Zubair Pasha may be made a bulwark against the approach of the Mahdi. Of course there is a certain risk that he will constitute a danger to Egypt, but this risk is, I think, a small one; and it is in any case preferable to incur it rather than to face the certain disadvantages of withdrawing without making any provision for the future government of the country, which would thus be sure to fall under the power of the Mahdi.â

I must admit that, up to the end of July, I was of opinion that if Zubair had been sent up General Gordonâs life would have been in danger. On the other hand, I am aware that a Cabinet Minister of high position was, from the first, in favour of sending Zubair up, and so indeed was Lord Wolseley.

At the beginning of August, General Gordon, having again begged that Zubair might be sent to Kartoum, I used my endeavours to secure the attainment of that object, but without success. It was now apparent that General Gordon could not in honour leave until some form of future government had been determined upon.

Zubairâs appointment having been disallowed, the only alternative seemed to be the Turks, and the suggestion was made that they should occupy the Soudan. Anything, in fact, to secure the country against anarchy and its reversion to barbarism.

In must be borne in mind General Gordon did not ask that an expedition should be sent; on the contrary, he deprecated sending any, unless for the purpose of saving the garrisons and of establishing some form of government.

The proposed movement of two squadrons of cavalry from Suakin to Berber is outside the question. It was to save Berber they were applied for, not for the relief of Kartoum. General Gordonâs message was, âSend troops (200) to Berber, or you will lose it!â It is fair to Sir Evelyn Baring, to add that on the 24th March he said, âUnder present circumstances I think an effort should be made to help General Gordon from Suakin, if it is at all a possible operation.â

If General Gordon had known how much in unison Sir Evelyn Baringâs advice had been with his own, and what support he had received at Sir Evelynâs hands, he would have been eager, had his life been spared, to acknowledge that co-operation.

Before concluding, I must say a few words with respect to the severe comments which occur in places throughout the Diaries, upon the meagre information he received from the Intelligence Department,[6] in connection with which the names of Major Chermside and Major Kitchener are mentioned. Now, with regard to the former of these officers, he was at Suakin, and therefore does not come into the question. With respect, however, to Major Kitchener, I am persuaded that he did all in his power to get messengers into Kartoum, for just in the same way General Gordon fancied he got them out, and yet how few succeeded in reaching their destination. In the same way too as General Gordon fancied his messengers had reached, so did Mr. Egerton fancy his had been successful, for at the end of July he hinted that General Gordon could have sent messengers out, in the same way as others had got in, and yet at that date only one had done so. It is due to Major Kitchener to say that from the time he went to Dongola he certainly kept us acquainted with the position of affairs at Kartoum in a manner most reliable, and deserving of much credit.

With these prefatory remarks I leave my brotherâs Journals to speak for themselves. He shows, to my mind, with the utmost clearness the position in which he was placed, and reiterates over and over again that nothing will induce him to leave Kartoum until he has secured the safety of all those who have stood by him. He says, âI will end these egotistical remarks by saying that no persuasion will induce me to change my views; and that, as to force, it is out of the question, for I have the people with me, at any rate, of the towns which hold out; therefore, if Her Majestyâs forces are not prepared to relieve the whole of the garrisons, the General should consider whether it is worth coming up. In his place, if not so prepared, I would not do so. I do not dictate; but I say, what every gentleman in Her Majestyâs army would agree to, that it would be mean to leave men, who (though they may not come up to our ideas as heroes) have stuck to me, though a Christian dog in their eyes, through great difficulties, and thus force them to surrender to those who have not conquered them, and to do that at the bidding of a foreign Power to save oneâs own skin. Why, the black sluts would stone me if they thought I meditated such action.â