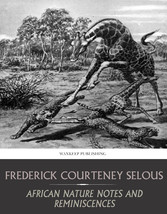 MR. SELOUS IS THE last of the big-game hunters of South Africa; the last of the mighty hunters whose experiences lay in the greatest hunting ground which this world has seen since civilized man has appeared therein. There are still many happy hunting grounds to be found by adventure-loving wilderness wanderers of sufficient hardihood and prowess; and in Central Africa the hunting grounds are of a character to satisfy the most exacting hunter of to-day. Nevertheless, they none of them quite equal South Africa as it once was, whether as regards the extraordinary multitude of big-game animals, the extraordinary variety of the species, or the bold attraction of the conditions under which the hunting was carried on.

Mr. Selous is much more than a mere big-game hunter, however; he is by instinct a keen field naturalist, an observer with a power of seeing, and of remembering what he has seen; and finally he is a writer who possesses to a very marked and unusual degree the power vividly and accurately to put on paper his observations. Such a combination of qualities is rare indeed, and the lack of any one of them effectually prevents any man from doing work as valuable as Mr. Selous has done. No ordinary naturalist fills the place at all. Big game exists only in the remote wilderness. Throughout historic time it has receded steadily before the advance of civilized man, and now the retrogressionâor, to be more accurate, the exterminationâis going on with appalling rapidity. The ordinary naturalist, if he goes into the haunts of big game, is apt to find numerous small animals of interest, and he naturally devotes an altogether disproportionate share of his time to these. Yet such time is almost wasted; for the little animals, and especially the insects and small birds, remain in the land long after the big game has vanished, and can then be studied at leisure by hosts of observers. The observation of the great beasts of the marsh and the mountain, the desert and the forest, must be made by those hardy adventurers who, unless explorers by profession, are almost certainly men to whom the chase itself is a dominant attraction. But the great majority of these hunters have no power whatever of seeing accurately. There is no fonder delusion than the belief that the average old hunter knows all about the animals of the wilderness. The Bushman may; but, as Mr. Selous has shown, neither the average English, Boer, nor Kafir hunter in South Africa does; and neither does the white or Indian hunter in North America. Any one who doubts this can be referred to what Mr. Selous has elsewhere said concerning the rhinoceroses of South Africa and the astounding misinformation about them which the average South African hunter of every type believed and perpetuated; and in my own experience I have found that most white and Indian hunters in the Rocky Mountains are just as little to be trusted when, for instance, they speak of the grizzly bear and the cougarâtwo animals which always tend to excite their imaginations. Finally, the few accurate observers among the men who have seen much of big game are apt wholly to lack the power of expression, and this means that their knowledge can benefit no one. The love of nature, the love of outdoor life, is growing in our race, and it is well that it should grow. Therefore we should prize exceedingly all contributions of worth to the life-histories of the great, splendid, terrible beasts whose lives add an immense majesty to the far-off wilds, and who inevitably pass away before the onrush of the greedy, energetic, forceful men, usually both unscrupulous and short-sighted, who make up the vanguard of civilization.

Mr. Selous has hunted in many parts of the world, but his most noteworthy experiences were in Africa, south of the Zambezi, when the dry uplands, and the valleys of the dwindling rivers, and the thick coast jungle belt, still held a fauna as vast and varied as that of the Pleistocene. Mighty hunters, Dutch and English, roamed hither and thither across the land on foot and on horseback, alone, or guiding the huge white-topped ox-wagons; several among their number wrote with power and charm of their adventures; and at the very last the man arose who could tell us more of value than any of his predecessors.

Mr. Selous by his observations illustrates the great desirability of having the views of the closet naturalist tested by competent field observers. In a previous volume he has effectively answered those amiable closet theorists who once advanced the Rousseau-like belief that in the state of nature hunted creatures suffered but little from either pain or terror; the truth being that, in the easy conditions of civilized life, we hardly even conceive of pain and horror as they were in times primeval; while it is only in nightmares that we now realize the maddened, hideous terror which our remote ancestors so often underwent, and which is a common incident in the lives of all harmless wild creatures. In the first two chapters of the present volume, Mr. Selousâ remarks on the fallacy of much of the theory of protective coloration are excellent. The whole subject is one fraught with difficulty and deserving of far more careful study than has ever yet been given it. That the general pattern of coloration, so to speak, of birds and mammals of the snowy North as compared to the South, of a dry desert as compared to a wet forest region, is due to the effect of the environment I have no question; and Mr. Selousâ observations and arguments show that the protective theory has been ridiculously overworked in trying to account for coloration like that of the zebra and giraffe, for instance; but there is much that as yet it is difficult to explain.

The most conspicuous colors of nature, for instance, are, under ordinary circumstances, black and white. Yet we continually find black, and sometimes white, animals thriving as well as their more dull-colored compeers under conditions that certainly seem as if they ought to favor the latter. The white goat of the Rocky Mountains may be helped by its coloration in winter, but in summer its white coat advertises its presence to every man or beast within range of vision, and this at the very time when the little white kids are most in need of protection. Eagles are formidable foes of these little kids, and undoubtedly their white color is a disadvantage to them in the struggle for existence, when they are compared with the dull-colored lambs of the mountain sheep of the same general habitat. The sheep tend to become mainly or entirely white at the northern portion of their rangeâthereby becoming exceedingly conspicuous in summerâbut change to grays and browns from the semi-Arctic regions southward. The goats, however, remain white everywhere.

Again, birds and mammals of the far North tend to be white, but one of the typical far northern birds is the jet black raven. It is hard to believe that the color of the snowy owl assists it in getting its prey, or that its color hampers the raven. The northern weasels and northern hares of America both turn white in winter. Thru most of their range the various species of these weasels and hares exist side by side with the close kinsmen of the weasel, the mink and the sable, and at the southern boundary of their range side by side with the small gray rabbits; none of which change their color any more than the lynx and fox do, and yet in the struggle for life seem to be put to no disadvantage thereby. The Arctic hare changes color as does the ptarmigan. The ordinary snow-shoe rabbits and jack-rabbits of the woods and plains south of the Arctic hare region also change their color; but the grouse which inhabit the same woods or open plains, such as the ruffed, the sharp-tailed and the spruce, unlike their northern kinsman, the ptarmigan, undergo no seasonal change. Around my ranch on the Little Missouri, the jack-rabbits all turned white in winter; the little cotton-tail rabbits did not; yet as far as I could see both species were equally at home and fared equally well.

When a boy, shooting on the edges of the desert in Egypt, I was imprest with the fact that the sand grouse, rosy bullfinches, sand larks and sand chats all in the coloration of their upper parts harmonized strikingly with the surroundings, while the bold black and white chats were peculiarly noticeable, and yet as far as I could see held their own as well in the struggle for existence. But as regards the first-named birds it seemed to me at the time that their coloration was probably protective, for in the breeding season the males of some of them showed striking colors, but always underneath, where they would not attract the attention of foes.

Mr. Selous also shows that the âsignalâ or âmutual recognitionâ theory of coloration has been at the least carried to an extreme by closet naturalists. The prongbuck of North America has the power of erecting the glistening white hairs on its rump until it looks like a chrysanthemum; but there seems scarcely any need of this as a signal; for prongbucks live out on the bare plains, never seek to avoid observation, are very conspicuous beasts, and have eyes like telescopes, so that one of them can easily see another a mile or two off. According to my experienceâbut of course the experience of any one man is of limited value, and affords little ground for generalizationâthe âchrysanthemumâ is shown when the beast is much aroused by curiosity or excitement.

Mr. Selousâ chapters on the lion possess a peculiar interest, for they represent without any exception the best study we have of the great, tawny, maned cat. No one observer can possibly cover the entire ground in a case such as this, for individual...