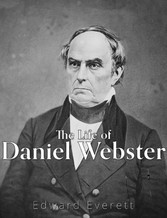 The Life of Daniel Webster

The Life of Daniel Webster

THE FAMILY OF DANIEL WEBSTER has been established in America from a very early period. It was of Scottish origin, but passed some time in England before the final emigration. Thomas Webster, the remotest ancestor who can be traced, was settled at Hampton, on the coast of New Hampshire, as early as 1636, sixteen years after the landing at Plymouth, and six years from the arrival of Governor Winthrop in Massachusetts Bay. The descent from Thomas Webster to Daniel can be traced in the church and town records of Hampton, Kingston (now East Kingston), and Salisbury. These records and the mouldering headstones of village graveyards are the heraldâs office of the fathers of New England. Noah Webster, the learned author of the American Dictionary of the English Language, was of a collateral branch of the family.

Ebenezer Webster, the father of Daniel, is still recollected in Kingston and Salisbury. His personal appearance was striking. He was erect, of athletic stature, six feet high, broad and full in the chest. Long service in the wars had given him a military air and carriage. He belonged to that intrepid border race, which lined the whole frontier of the Anglo-American colonies, by turns farmers, huntsmen, and soldiers, and passing their lives in one long struggle with the hardships of an infant settlement, on the skirts of a primeval forest. Ebenezer Webster enlisted early in life as a common soldier, in one of those formidable companies of rangers, which rendered such important services under Sir Jeffrey Amherst and Wolfe in the Seven Yearsâ War. He followed the former distinguished leader in the invasion of Canada, attracted the attention and gained the good-will of his superior officers by his brave and faithful conduct, and rose to the rank of a captain before the end of the war.

Captain Webster was one of the settlers of the newly granted township of Salisbury, and received an allotment in its northerly portion. More adventurous than others of the company, he cut his way deeper into the wilderness, and made the path he could not find. At this time his nearest civilized neighbors on the northwest were at Montreal.

The following allusion of Mr. Webster to his birthplace will be read with interest. It is from a speech delivered before a great public assembly at Saratoga, in the year 1840:

âIt did not happen to me to be born in a log cabin; but my elder brothers and sisters were born in a log cabin, raised amid the snowdrifts of New Hampshire, at a period so early that, when the smoke first rose from its rude chimney, and curled over the frozen hills, there was no similar evidence of a white manâs habitation between it and the settlements on the rivers of Canada. Its remains still exist. I make to it an annual visit. I carry my children to it to teach them the hardships endured by the generations which have gone before them. I love to dwell on the tender recollections, the kindred ties, the early affections, and the touching narratives and incidents, which mingle with all I know of this primitive family abode.â

Soon after his settlement in Salisbury, the first wife of Ebenezer Webster having deceased, he married Abigail Eastman, who became the mother of Ezekiel and Daniel Webster, the only sons of the second marriage. Like the mothers of so many men of eminence, she was a woman of more than ordinary intellect, and possessed a force of character which was felt throughout the humble circle in which she moved.

About the time of his second marriage, Captain Ebenezer Webster erected a frame house hard by the log cabin. He dug a well near it and planted an elm sapling. In this house Daniel Webster was born, in the last year of the Revolutionary war, on the 18th of January, 1782.

The interval between the peace of 1763 and the breaking out of the war of the Revolution was one of excitement and anxiety throughout the Colonies. Like so many of the officers and soldiers of the former war, Captain Webster obeyed the first call to arms in the new struggle. He commanded a company, chiefly composed of his own townspeople, friends, and kindred, who followed him through the greater portion of the war. He was at the battle of White Plains, and was at West Point when the treason of Arnold was discovered. He acted as a Major under Stark at Bennington, and contributed his share to the success of that eventful day.

If the character and situation of the place, and the circumstances under which Daniel Webster passed the first years of his life, might seem adverse to the early cultivation of his extraordinary talent, it still cannot be doubted that they possessed influences favorable to elevation and strength of character. The hardships of an infant settlement and border life, the traditions of a long series of Indian wars, and incidents of two mighty national contests, in which an honored parent had borne his part, were circumstances to leave an abiding impression on the mind of a thoughtful child, and induce an early maturity of character.

It may well be supposed that Mr. Websterâs early opportunities for education were very scanty. Something that was called a school was kept for two or three months in the winter, frequently by an itinerant, too often a pretender, claiming only to teach a little reading, writing, and ciphering, and wholly incompetent to give any valuable assistance to a clever youth in learning either.

From the village library at Salisbury, also, Mr. Webster was able to obtain a moderate supply of good reading.

The year before Mr. Webster was born was rendered memorable in New Hampshire by the foundation of the Academy at Exeter, through the munificence of the Honorable John Phillips. To this Academy Mr. Webster was taken by his father in May, 1796. He enjoyed the advantage of only a few monthsâ instruction in this excellent school; but, short as the period was, his mind appears to have received an impulse of a most genial and quickening character. The following anecdote from Mr. Marchâs âReminiscences of Congressâ will not be thought out of place in this connection:â

âIt may appear somewhat singular that the greatest orator of modern times should have evinced in his boyhood the strongest antipathy to public declamation. This fact, however, is established by his own words, which have recently appeared in print. âI believe,â says Mr. Webster, âI made tolerable progress in most branches which I attended to while in this school; but there was one thing I could not do. I could not make a declamation. I could not speak before the school. The kind and excellent Buckminster sought especially to persuade me to perform the exercise of declamation, like other boys, but I could not do it. Many a piece did I commit to memory, and recite and rehearse in my own room, over and over again; yet when the day came, when the school collected to hear declamations, when my name was called, and I saw all eyes turned to my seat, I could not raise myself from it. Sometimes the instructors frowned, sometimes they smiled. Mr. Buckminster always pressed and entreated, most winningly, that I would venture. But I never could command sufficient resolution.â Such diffidence of its own powers may be natural to genius, nervously fearful of being unable to reach that ideal which it proposes as the only full consummation of its wishes. It is fortunate, however, for the age, fortunate for all ages, that Mr. Webster by determined will and frequent trial overcame this moral incapacity, as his great prototype, the Grecian orator, subdued his physical defect.ââpp. 12, 13.

After a few months well spent at Exeter, Mr. Webster returned home, and in February, 1797, was placed by his father under the Rev. Samuel Wood, the minister of the neighboring town of Boscawen. He lived in Mr. Woodâs family, and for board and instruction the entire charge was one dollar per week.

On their way to Mr. Woodâs, Mr. Websterâs father first opened to his son, now fifteen years old, the design of sending him to college, the thought of which had never before entered his mind. âI remember,â says Mr. Webster, in an autobiographical memorandum of his boyhood, âthe very hill which we were ascending, through deep snows, in a New England sleigh, when my father made known this purpose to me. I could not speak. How could he, I thought, with so large a family and in such narrow circumstances, think of incurring so great an expense for me. A warm glow ran all over me, and I laid my head on my fatherâs shoulder and wept.â

From February till August, 1797, Mr. Webster remained under the instruction of Mr. Wood, at Boscawen, and completed his preparation for college. It is hardly necessary to say, that the preparation was imperfect. Short as was his period of preparation, however, it enabled Mr. Webster to lay the foundation of a knowledge of the classical writers, especially the Latin, which was greatly increased in college, and which was kept up by constant recurrence to the great models of antiquity, during the busiest periods of active life. The happiness of Mr. Websterâs occasional citations from the Latin classics was a striking feature of his oratory.

Mr. Webster entered Dartmouth College in 1797, and passed the four academic years in assiduous study. He was not...