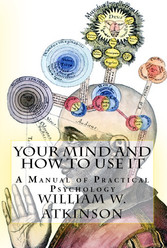 Moreover, while we may perceive a simple single sensation, our perceptions are usually of a group of sensations. Perception is usually employed in grouping sensations and identifying them with the object or objects causing them. In its identification it draws upon whatever memory of past experiences the mind may possess. Memory, imagination, feeling, and thought are called into play, to some extent, in every clear perception. The infant has but feeble perception, but as it gains experience it begins to manifest perceptions and form percepts. Sensations resemble the letters of the alphabet, and perception the forming of words and sentences from the letters. Thus c, a, and t symbolize sensations, while the word "cat," formed from them, symbolizes the perception of the object.

It is held that all knowledge begins with sensation; that the mental history of the race or individual begins with its first sensation. But, while this is admitted, it must be remembered that sensation simply provides the simple, elementary, raw material of thought. The first process of actual thought, or knowledge, begins with perception. From our percepts all of our higher concepts and ideas are formed. Perception depends upon association of the sensation with other sensations previously experienced; it is based upon experience. The greater the experience, the greater is the possibility of perception, all else being equal.

A percept is "that which is perceived; the object of the act of perception." The percept, of course, is a mental state corresponding with its outside object. It is a combination of several sensations which are regarded as the qualities of the outside object, to which are combined the memories of past experiences, ideas, feelings, and thoughts. A percept, then, while the simplest form of thought, is seen to be a mental state. The formation of a percept consists of three gradual stages, viz.: (1) The attention forms definite conscious sensations from indefinite nervous reports; (2) the mind interprets these definite conscious sensations and attributes them to the outside object causing them; (3) the related sensations are grouped together, their unity perceived, and they are regarded as qualities of the outside object.

The plain distinction between a sensation and a percept may be fixed in the mind by remembering the following: A sensation is a feeling; a percept is a simple thought identifying one or more sensations. A sensation is merely the conscious recognition of an excitation of a nerve end; a percept results from a distinct mental process regarding the sensation.

It is of the utmost importance that we develop and train our powers of perception. For our education depends very materially upon our perceptive power. What matters it to us if the outside world be filled with manifold objects, if we do not perceive them to exist? Upon perception depends the material of our mental world. Many persons go through the world without perceiving even the most obvious facts. Their eyes and ears are perfect instruments, their nerves convey accurate reports, but the perceptive faculties of the mind fail to observe and interpret the report of the senses. They see and hear distinctly, but the reports of the senses are not observed or noted by them; they mean nothing to them. One may see many things, and yet observe but few. It is not upon what we see or hear that our stock of knowledge depends, so much as it does upon what we perceive, notice, or observe.

Not only is one's stock of practical knowledge largely based upon developed perception, but one's success also depends materially upon the same faculties. In business and professional life the successful man is usually he who has developed perceptive powers; he who has learned to perceive, observe, and note. The man who perceives and takes mental notes of what occurs in his world is the man who is apt to know things when such knowledge is needed. In this age of "book education" we find that the young people are not nearly so observant as are those children who had to depend upon the powers of perception for their knowledge. The young Arab or Indian will observe more in an hour than the civilized child will in a day. To live in a world of books tends, in many cases, to weaken the powers of observation and perception.

Perception may be developed by practice. Begin by taking notice of the things seen and heard in your usual walks. Keep wide open the eyes of the mind. Notice the faces of people, their walk, their characteristics. Look for interesting and odd things, and you will see them. Do not go through life in a daydream, but keep a sharp lookout for things of interest and value. The most familiar things will repay you for the time and work of examining them in detail, and the practice gained by such tasks will prove valuable in your development of perception.

An authority remarks that very few persons, even those living in the country, know whether a cow's ears are above, below, behind, or in front of her horns; nor whether cats descend trees head first or tail first. Very few persons can distinguish between the leaves of the various kinds of familiar trees in their neighborhood. Comparatively few persons are able to describe the house in which they live, at least beyond the most general featuresâthe details are unknown.

Houdin, the French conjurer, was able to pass by a shop window and perceive every article in it, and then repeat what he had seen. But he acquired this skill only by constant and gradual practice. He himself decried his skill and claimed that it was as nothing compared to that of the fashionable woman who can pass another woman on the street and "take in" her entire attire, from head to foot, at one glance, and "be able to describe not only the fashion and quality of the stuffs, but also say if the lace be real or only machine made." A former president of Yale is said to have been able to glance at a book and read a quarter of a page at one time.

Any study or occupation which requires analysis will develop the power of perception. Consequently, if we will analyze the things we see, resolving them into their parts or elements, we will likewise develop the perceptive faculties. It is a good exercise to examine some small object and endeavor to discover as many separate points of perception as possible, noting them on a sheet of paper. The most familiar object, if carefully examined, will yield rich returns.

If two persons will enter into a contest of this kind, the spirit of rivalry and competition will quicken the powers of observation. Those who have had the patience and perseverance to systematically practice exercises of this kind, report that they notice a steady improvement from the very start. But...