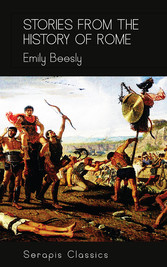 II. â THE HORATII AND THE CURIATII

IN the reign of King Tullus Hostilius there was a quarrel between the people of Rome and the people of Alba. The Romans and the Albans were generally very friendly to each other. They were of the same race; their way of living was the same, and they spoke the same language. Some of the Romans had married Alban women, and some of the Albans had married Roman women, so that each people had friends and relations in the other town.

But now there was a quarrel between them, and the Roman army with King Tullus at its head marched out to meet the Albans, who were commanded by their Dictator, Mettius Fufetius.

When the armies came near together, the Alban Dictator sent a messenger to King Tullus. The messenger came to the Roman army, and was led before the king, who was preparing himself for the battle.

Now, Tullus was a brave warrior; he was young and strong, and eager to win glory in war; but still he was wise, and he did not refuse to listen to the message of Mettius. "O Tullus," said the messenger, "I am sent to you by the Dictator of the Albans. He bids me tell you, that it will be much for the good of Rome as well as for the good of Alba if you will come out in front of your army, and speak with him before the fight begins."

Tullus agreed to do as Mettius asked. The two armies took their places, and all was made ready for battle; and then Mettius and Tullus, followed by some of their nobles, advanced midway between the armies, and Mettius spoke these words,â

"Hear me, King Tullus, and you nobles of Rome. It seems to me that the only cause of our quarrel is that we know not whether Rome or Alba is the stronger, and which town shall be the master of the other. Can we not decide this in some other way than by the death of all the brave men who must be slain if we begin to fight?"

The thought pleased King Tullus, and after consulting together, they fixed upon a plan. It was agreed that three Romans should fight against three Albans, and that if the Romans conquered, Rome should govern Alba; but if the Albans were victorious, then Alba should govern Rome.

It happened that in the Roman army there were three brothers called Horatius, all strong men and brave soldiers. They were the sons of an old Roman named Publius Horatius, who had taught them, as Roman fathers in those days taught their sons, that they ought to be ready to die for the good of their people and their dear city of Rome. That was the first duty of every Roman, and you shall hear how the Horatii kept their father's sayings.

The Roman army felt that they could choose no better champions than these three brothers. And the Horatii proudly and gladly agreed to fight, and each in his heart resolved to do his very best to save his country from being subject to Alba.

Now in the Alban army there were also three brothers, whose name was Curiatius. They too were good soldiers, and their countrymen chose them to fight for Alba. These three brothers were friends of the Horatii, such dear friends that one of them had promised to marry the sister of Horatius. But they loved their town of Alba, and like the Romans they felt that they must lose their own lives, or take those of their friends, for the sake of their country.

When the Roman King and the Alban Dictator had promised solemnly that Rome and Alba should keep the agreement, the three brothers on each side took their weapons and marched out between the two armies. The soldiers of both towns sat down on each side, to watch the fight, with anxious hearts, knowing that the fate of their country depended on the courage and skill of those few men.

At first the battle seemed very equal, for the six were all good soldiers and full of bravery; their hearts were set on winning the victory, and they were not thinking of the wounds or death that they might suffer in the struggle. But soon it seemed that the Albans were getting the better, for two of the Romans were killed, but the Albans were all wounded. The Alban army shouted for joy; they thought their victory was won, as they saw the three Curiatii surround the one Horatius who was still alive and unhurt. But cries of anger broke from the Romans when they saw their last champion turn and fly from his enemies.

"Shame on the coward!" they cried; "the name of Horatius is disgraced for ever. Better he had died gloriously doing his duty like his brothers."

But they soon saw that Horatius was no coward, and that his flight was only a way to separate the three Albans, who all together would have been more than a match for him. Horatius knew that all the Curiatii were wounded. As he fled they followed him, and soon the one who was least wounded came up to him. Horatius turned instantly to attack him. The combat was fierce, and lasted for some time; the Roman and Alban armies eagerly watched the two champions, and the two other Curiatii tried hard to reach their brother to help him. But they were wounded and could not move fast, and before they could come up they saw their brother fall. Still they came forward; the one who was least wounded hastened on, and Horatius, joyful with his victory, stepped out to meet him. The Alban, bleeding and out of breath with the haste he had made, had no chance with the conqueror; and the third brother, dragging himself on with difficulty, yet with no thought of yielding, saw him die, and knew that he was left alone.

Then Horatius sprang forward to meet him, crying out,â

"Two of these brothers have died by my hand. Now the third shall follow them, that Rome may rule over Alba!"

Having said this he stabbed Curiatius, and so died the last of the Alban brothers.

When the Romans saw that their enemies were slain they shouted for joy, and Mettius the Alban Dictator came to King Tullus, and asked him if he had any commands for him; for he remembered the agreement that had been made between them before the fight began. Tullus told him to take his army safely back to Alba, but he said that the Albans must keep themselves ready to help him in war, if he should want them.

So the armies departed to their homes, after having buried the five brothers who had fallen. The graves of the two Romans were together; those of the Albans were separate, in the places where they died. Hundreds of years afterwards their tombs were still to be seen.

Great was the joy in Rome when news came from the camp that Horatius was victorious; the people decked their houses with garlands and hung them with bright-coloured cloths, and came in crowds flocking to see the brave man who had saved Rome. The army marched in at the gate of the city, and in the front came Horatius, carrying in his hands the swords of the three Curiatii, and wearing on his shoulders the mantle that one of them had worn. And the people cried to the gods to bless their champion, and the women threw flowers and laurel boughs on his helmet and under his feet as he went along.

But there was one person in Rome whose heart was sad that day, and that was the sister of Horatius, when she heard that her brother had killed the man who was in a little while to have been her husband. In her grief and despair she ran out to meet Horatius, with her head uncovered and her hair loose on her shoulders; and when she met him she saw that he was wearing the mantle that she herself had embroidered and given to Curiatius. Then, in a voice of sorrow, she called out the name of Curiatius, and told Horatius that he was a cruel brother to her, because he had killed the man she loved so well.

The words she said made Horatius very angry.

"What," cried he, "do you forget your two brothers who are dead, and your brother who is still alive, and your country, which I have this day saved!"

Then in his rage he drew his sword, and stabbed his sister to the heart, so that she died, saying,â

"So may it be done to every maid who is a Roman, and weeps for the death of an enemy!"

The people of Rome were very much shocked at what Horatius had done, and they took him and led him before the king, who then spoke to the people, and said,â

"I will choose two judges to judge this man, and to say what shall be done to him."

And so he did. Then the judges said that Horatius must be slain. But he cried out, and said,â

"Let me be tried by the whole people, and let them say if I deserve to be punished."

So the king called the people to meet together to try Horatius for having killed his sister. And when the people were assembled Horatius came before them, and with him was his old father, Publius Horatius.

In Rome a father was able to do as he pleased with his son, even after the son had grown up to be a manâhe could sell him as a slave, or put him to death, or punish him in any way he chose; but Publius Horatius did not wish to give his son a severe punishment, for he thought that his daughter deserved to die. The father and the son were of the same temperâthey loved their country better than they loved their family.

The old man stood up before the people and spoke to them.

"My daughter," said he, "has been rightly punished, for she forgot her duty, and loved a stranger better than she loved Rome. Do not take away from me my last child, but remember that I have already lost two brave sons, who died in battle for their country."

Then he threw one arm round his son, and pointing with the other hand to the armour and weapons of the Curiatii, which had been hung up on a pillar in the open square where the people were met,â

"O Romans," he cried, "could you bear to see this young man die shamefully, whom you saw a little while ago marching as a victor through the streets of Rome? Would you chain these hands which have just...