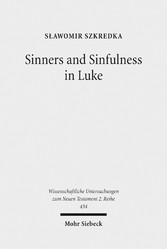 
In staging his story of Jesus, Luke dedicates considerable space to the characters known as sinners. Scholars have noted this peculiarly Lukan emphasis. Still, scholarly attention has tended to limit itself to the so-called sinner texts, that is, the pericopae containing the word 'sinner' or its cognates. The multiple indirect references to sin and sinners have been overlooked. Responding to this lacuna, S?awomir Szkredka examines the role of both direct and indirect references to sinfulness in the initial episodes of Jesus' activity. His study reveals that the sinners are not an easily identifiable category of characters: their defining characteristic - their sinfulness - is often found inadequate, rendered inapplicable, or transferred to another character. What the reader understands about sinners is that he or she must discover and assimilate Jesus' perception of them. The reader's coming to know Jesus is enacted.