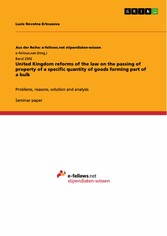 United Kingdom reforms of the law on the passing of property of a specific quantity of goods forming part of a bulk - Problems, reasons, solution and analysis

United Kingdom reforms of the law on the passing of property of a specific quantity of goods forming part of a bulk - Problems, reasons, solution and analysis


Seminar paper from the year 2012 in the subject Law - Civil / Private / Law of Obligation / Property Law, grade: 72, Cardiff University (School of Law), course: LLB Module Sales of Godds and Agency, language: English, abstract: In this essay I will analyse the appropriateness of the reform of the law on the passing of property of a specific quantity of goods forming part of a bulk by measuring it against its objectives, examining how far it solves the problems of the old law and considering the inconsistencies which introduces into the Sales law. Firstly, the problems of the law before the reform and the reasons for the reform will be discussed. Secondly, the law introduced by the reform will be described; and thirdly, the solution offered by the reform and its interaction with the rules on passing of property and passing of risk will be critically analysed. The author will argue that while the reform seemingly successfully responds to all problems of the old law, after scrutiny it is clear that the reform suffers from inconsistency and immanent injustice and fails to provide the intended protection to the buyer. Until September 1995 where a buyer bought a specified quantity forming part of an identified bulk, i.e. 250 tons of wheat from a named ship carrying a cargo of 500 tons, he could not acquire property in the goods until the goods were ascertained. This was result of a mandatory rule in s. 16 which provided that 'where there is a contract for the sale of unascertained goods no property in the goods is transferred to the buyer unless and until the goods are ascertained'. The most serious consequence of the mandatory rule in s. 16 was that the buyer did not acquire property in the goods even though he had paid for it and received a document purporting to be a document of title. If the seller became insolvent before the goods were ascertained, both the paid price and the goods in the bulk passed to the office-holder in insolvency for the benefit of secured creditors and the buyer happens to be merely an unsecured creditor with no proprietary claim to his goods. As follows the sellerÂ´s secured creditors might receive an undeserved windfall, because both the goods and the paid price might fall into the assets of the insolvent seller in liquidation. The Sale of Goods (Amendment) Act 1995 attempted to solve this undesirable situation by introducing an exception to s.16. In s. 20A (1) it was introduced that unless otherwise agreed the prepaying buyer purchasing specified quantity of an identified bulk acquires an undivided share in the bulk ad becomes a tenant in common of the bulk.