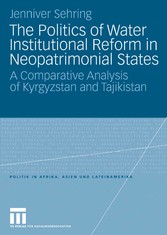 'There is more than enough water in the world for domestic purposes, for agriculture and for industry. (...) In short, scarcity is manufactured through political processes and institutions (...). ' (United Nations Human Development Report 2006: 3) Water scarcity, water crisis, water wars - since the beginning of the 1990s these terms have appeared again and again in scientific debates, political strategies, and media reports. Water is perceived as a scarce resource that needs efficient management in order to satisfy all needs and to prevent violent conflicts over its distribution. Considerable research has been devoted to this topic. In this research, water is commonly referred to as a common pool resource: a n- excludable public good with rivalry in terms of consumption. Hence, research has long focused on collective action problems in managing this common pool resource (e. g. Ostrom 1990, 1992). In recent years, anthropological and sociological scholars in particular have criticized that in these studies the complexity of water, its embeddedness in a wider cultural and social c- text, and the role of power have been neglected. Water is different from other natural - sources in some important aspects: its mobility, its variability, and its multiplicity (Mehta 2006: 2f; Linton 2006: [10]). Mobility makes ownership claims difficult: Water moves, transcending state borders, not fixed like other resources. Variability refers to the fact that its availability varies temporarily, depending on weather conditions.

Jenniver Sehring is assistant professor at the Department of Comparative Politics at the University of Wuerzburg, Germany.