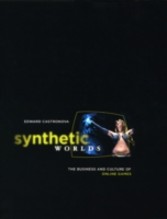 Synthetic Worlds - The Business and Culture of Online Games

Synthetic Worlds - The Business and Culture of Online Games

From EverQuest to World of Warcraft, online games have evolved from the exclusive domain of computer geeks into an extraordinarily lucrative staple of the entertainment industry. People of all ages and from all walks of life now spend thousands of hours-and dollars-partaking in this popular new brand of escapism. But the line between fantasy and reality is starting to blur. Players have created virtual societies with governments and economies of their own whose currencies now trade against the dollar on eBay at rates higher than the yen. And the players who inhabit these synthetic worlds are starting to spend more time online than at their day jobs.In Synthetic Worlds, Edward Castronova offers the first comprehensive look at the online game industry, exploring its implications for business and culture alike. He starts with the players, giving us a revealing look into the everyday lives of the gamers-outlining what they do in their synthetic worlds and why. He then describes the economies inside these worlds to show how they might dramatically affect real world financial systems, from potential disruptions of markets to new business horizons. Ultimately, he explores the long-term social consequences of online games: If players can inhabit worlds that are more alluring and gratifying than reality, then how can the real world ever compete? Will a day ever come when we spend more time in these synthetic worlds than in our own? Or even more startling, will a day ever come when such questions no longer sound alarmist but instead seem obsolete?With more thanten million active players worldwide-and with Microsoft and Sony pouring hundreds of millions of dollars into video game development-online games have become too big to ignore. Synthetic Worlds spearheads our efforts to come to terms with this virtual reality and its concrete effects.",Illuminating. . . . Castronova's analysis of the economics of fun is intriguing.Virtual-world economies are designed to make the resulting game interesting and enjoyable for their inhabitants. Many games follow a rags-to-riches storyline, for example. But how can all the players end up in the top 10%? Simple: the upwardly mobile human players need only be a subset of the world's population. An underclass of computer-controlled 'bot'citizens, meanwhile, stays poor forever. Mr. Castronovaexplains all this with clarity, wit, and a merciful lack of academic jargon.",-The Economist",Synthetic Worlds is a surprisingly profound book about the social, political, and economic issues arising from the emergence of vast multiplayer games on the Internet. What Castronova has realized is that these games, where players contribute considerable labor in exchange for things they value, are not merely like real economies, they are real economies, displaying inflation, fraud, Chinese sweatshops, and some surprising in-game innovations.",-Tim Harford, Chronicle of Higher Education