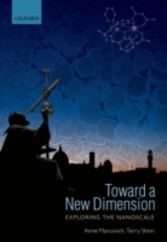 Over the course of the last thirty years, the investigation of objects at the nano scale has rocketed. Nanoscale scientific research has not only powerfully affected the amount and orientation of knowledge, it has perhaps even more significantly redirected the ways in which much research work is carried out, changed scientists' methodology and reasoning processes, and influenced aspects of the structure of career trajectory and the functioning of scientific disciplines. This book identifies key historical moments and episodes in the birth and evolution of nanoscience, discusses the novel repertory of epistemological concerns of practitioners, and signals sociological propensities. As Galileo's telescope explored the moon's surface four hundred years ago, nano instrumentation now makes it possible to see the surface of single molecules. Moreover, practitioners are able to manipulate individual atoms and molecules at will to produce pre-designed syntheticmaterials, non-existent in nature. The combinatorial of heightened observational capacity and the tailoring of synthetic artificial materials exhibiting hitherto novel physical properties has widened and transformed the worlds of scientific knowledge and technical artefact. This book invites the question:to what extent does nanoscale scientific research constitute a kind of 'scientific revolution'?