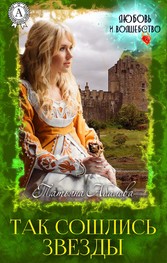 So the stars came together

So the stars came together

Strange world Korr-U. There are no less witches in it than people, wizards open their portals with a wave of their hands, the gods look at the celebrations, and on the throne there is a werewolf regent - an alien who has got a bone across the throat of the local nobility. Troubled in Korr-U. Witches hiding their gift from neighbors, secretly do evil: then crops will be shed, then they will be harvested on the cattle, then the arable land will be turned into a swamp. The fires are burning - the peasant people are indignant, catching the gifted with magic. But witches do not harm people, some unknown enemy stirs up hatred, casting a shadow on them. There is nowhere to run to the witches, except under the wing to the announced patron - Lord Toresh, the powerful magician and descendant of the true kings of Korr-U. To him gets and orphan Yasya, as it turned out, the last of the fiery witches. The girl saw the terrible death of her mother, and now her only desire is to survive.