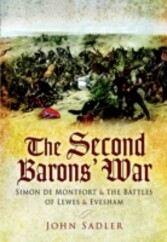 For two years in the mid-thirteenth century England was torn by a bloody civil war between the king and his nobles. For a short time, the country came close to unseating the monarchy, and the outcome changed the course of English history. Yet this critical episode receives far less attention than the Wars of the Roses and the English Civil Wars that followed. John Sadler, in this highly readable and perceptive study of the Barons' War, describes events in vivid detail. He explores the leading personalities, whose bitter quarrel gave rise to the conflict - Henry III, his son Prince Edward, later Edward I, and their most famous opponent, Simon de Montfort, whose masterful charisma galvanized support among the discontented nobility. The clash of interests between the king and his 'overmighty' subjects is reconsidered, as are the personal and political tensions that polarized opinion and tested loyalties to the limit. But the main emphasis of John Sadler's account is on events in the field, in particular the two major campaigns that determined the course of the war and indeed the future government of England - the battles fought at Lewes and Evesham.