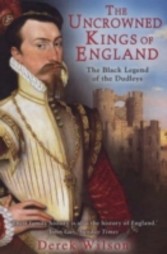 In the political ferment of the Tudor century one family above all others was always at the troubled centre of court and council. During those years the Dudleys were never far from controversy. Three of them were executed for treason. They were universally condemned as scheming, ruthless, over-ambitious charmers, and one was defamed as a wife murderer. Yet Edmund Dudley was instrumental in establishing the financial basis of the Tudor dynasty, and John Dudley, Duke of Northumberland, led victorious armies, laid the foundations of the Royal Navy, ruled as uncrowned king and almost succeeded in placing Lady Jane Grey on the throne. The most famous of them all, Robert Dudley, Earl of Leicester, came the closest to marrying Elizabeth I, was her foremost favourite for 30 years and governed the Netherlands in her name, while his successor, Sir Robert Dudley, was one of the Queen's most audacious seadogs in the closing years of her reign, but fell foul of James I. Thus the fortunes of this astonishing family rose and fell with those of the royal line they served faithfully through a tumultuous century.see www.derekwilson.com