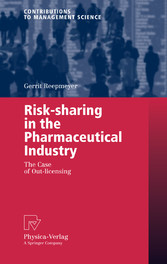 Risk-sharing in the Pharmaceutical Industry - The Case of Out-licensing

Risk-sharing in the Pharmaceutical Industry - The Case of Out-licensing

The productivity in pharmaceutical research and development faces intense presÂ­ sure. R&D expenditures of the major US and European companies have topped US$ 33 billion in 2003 compared to around US$ 13 billion just a decade ago. At the same time, the number of new drug approvals has dropped from 53 in 1996 to only 35 in 2003. Moreover, the protraction of clinical trials has significantly reduced the effective time of patent protection. The consequences are devastating. Monopoly profits have started to decline and the average costs per new drug have reached a reÂ­ cord level of close to US$ 1 billion today. As a result, any failure of a new subÂ­ stance in the R&D process can lead to considerable losses, and the risks of introducÂ­ ing a new drug to the market have grown tremendously. Particularly if a company is highly dependent on just a handful of mega-selling blockbuster drugs, the risks can be even greater. For example, Pfizer generated about 90% of its worldwide revenues in 2002 with just 8 products. Any shortfall of a promising late-stage drug candidate would have left Pfizer with a gaping hole in its product portfolio. In order to deal with these risks, many pharmaceutical companies have started to organize their R&D in partnership. In fact, more than 600 alliances in pharmaceutical R&D are signed every year.