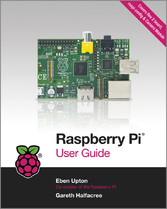 “Children today are digital natives”, said a man I got talking to at a fireworks party last year. “I don’t understand why you’re making this thing. My kids know more about setting up our PC than I do.”

I asked him if they could program, to which he replied: “Why would they want to? The computers do all the stuff they need for them already, don’t they? Isn’t that the point?”

As it happens, plenty of kids today aren’t digital natives. We have yet to meet any of these imagined wild digital children, swinging from ropes of twisted-pair cable and chanting war songs in nicely parsed Python. In the Raspberry Pi Foundation’s educational outreach work, we do meet a lot of kids whose entire interaction with technology is limited to closed platforms with graphical user interfaces (GUIs) that they use to play movies, do a spot of word-processed homework and play games. They can browse the web, upload pictures and video, and even design web pages. (They’re often better at setting the satellite TV box than Mum or Dad, too.) It’s a useful toolset, but it’s shockingly incomplete, and in a country where 20% of households still don’t have a computer in the home, even this toolset is not available to all children.

Despite the most fervent wishes of my new acquaintance at the fireworks party, computers don’t program themselves. We need an industry full of skilled engineers to keep technology moving forward, and we need young people to be taking those jobs to fill the pipeline as older engineers retire and leave the industry. But there’s much more to teaching a skill like programmatic thinking than breeding a new generation of coders and hardware hackers. Being able to structure your creative thoughts and tasks in complex, non-linear ways is a learned talent, and one that has huge benefits for everyone who acquires it, from historians to designers, lawyers and chemists.

It’s enormous, rewarding, creative fun. You can create gorgeous intricacies, as well as (much more gorgeous, in my opinion) clever, devastatingly quick and deceptively simple-looking routes through, under and over obstacles. You can make stuff that’ll have other people looking on jealously, and that’ll make you feel wonderfully smug all afternoon. In my day job, where I design the sort of silicon chips that we use in the Raspberry Pi as a processor and work on the low-level software that runs on them, I basically get paid to sit around all day playing. What could be better than equipping people to be able to spend a lifetime doing that?

It’s not even as if we’re coming from a position where children don’t want to get involved in the computer industry. A big kick up the backside came a few years ago, when we were moving quite slowly on the Raspberry Pi project. All the development work on Raspberry Pi was done in the spare evenings and weekends of the Foundation’s trustees and volunteers—we’re a charity, so the trustees aren’t paid by the Foundation, and we all have full-time jobs to pay the bills. This meant that occasionally, motivation was hard to come by when all I wanted to do in the evening was slump in front of the Arrested Development boxed set with a glass of wine. One evening, when not slumping, I was talking to a neighbour’s nephew about the subjects he was taking for his General Certificate of Secondary Education (GCSE, the British system of public examinations taken in various subjects from the age of about 16), and I asked him what he wanted to do for a living later on.

“I want to write computer games”, he said.

“Awesome. What sort of computer do you have at home? I’ve got some programming books you might be interested in.”

On talking with him a bit more, it became clear that this perfectly smart kid had never done any real programming at all; that there wasn’t any machine that he could program in the house; and that his information and communication technology (ICT) classes—where he shared a computer and was taught about web page design, using spreadsheets and word processing—hadn’t really equipped him to use a computer even in the barest sense. But computer games were a passion for him (and there’s nothing peculiar about wanting to work on something you’re passionate about). So that was what he was hoping the GCSE subjects he’d chosen would enable him to do. He certainly had the artistic skills that the games industry looks for, and his maths and science marks weren’t bad. But his schooling had skirted around any programming—there were no Computing options on his syllabus, just more of the same ICT classes, with its emphasis on end users rather than programming. And his home interactions with computing meant that he stood a vanishingly small chance of acquiring the skills he needed in order to do what he really wanted to do with his life.

This is the sort of situation I want to see the back of, where potential and enthusiasm is squandered to no purpose. Now, obviously, I’m not monomaniacal enough to imagine that simply making the Raspberry Pi is enough to effect all the changes that are needed. But I do believe that it can act as a catalyst. We’re already seeing big changes in the UK schools’ curriculum, where Computing is arriving on the syllabus and ICT is being reshaped, and we’ve seen a massive change in awareness of a gap in our educational and cultural provision for kids just in the short time since the Raspberry Pi was launched.

Too many of the computing devices a child will interact with daily are so locked down that they can’t be used creatively as a tool—even though computing is a creative subject. Try using your iPhone to act as the brains of a robot, or getting your PS3 to play a game you’ve written. Sure, you can program the home PC, but there are significant barriers in doing that which a lot of children don’t overcome: the need to download special software, and having the sort of parents who aren’t worried about you breaking something that they don’t know how to fix. And plenty of kids aren’t even aware that doing such a thing as programming the home PC is possible. They think of the PC as a machine with nice clicky icons that give you an easy way to do the things you need to do so you don’t need to think much. It comes in a sealed box, which Mum and Dad use to do the banking and which will cost lots of money to replace if something goes wrong!

The Raspberry Pi is cheap enough to buy with a few weeks’ pocket money, and you probably have all the equipment you need to make it work: a TV, an SD card that can come from an old camera, a mobile phone charger, a keyboard and a mouse. It’s not shared with the family; it belongs to the kid; and it’s small enough to put in a pocket and take to a friend’s house. If something goes wrong, it’s no big deal—you just swap out a new SD card and your Raspberry Pi is factory-new again. And all the tools, environments and learning materials that you need to get started on the long, smooth curve to learning how to program your Raspberry Pi are right there, waiting for you as soon as you turn it on.

A bit of history

I started work on a tiny, affordable, bare-bones computer about six years ago, when I was a Director of Studies in Computer Science at Cambridge University. I’d received a degree at the University Computer Lab as well as studying for a PhD while teaching there, and over that period, I’d noticed a distinct decline in the skillset of the young people who were applying to read Computer Science at the Lab. From a position in the mid-1990s, when 17-year-olds wanting to read Computer Science had come to the University with a grounding in several computer languages, knew a bit about hardware hacking, and often even worked in assembly language, we gradually found ourselves in a position where, by 2005, those kids were arriving having done some HTML—with a bit of PHP and Cascading Style Sheets if you were lucky. They were still fearsomely clever kids with lots of potential, but their experience with computers was entirely different from what we’d been seeing before.

The Computer Science course at Cambridge includes about 60 weeks of lecture and seminar time over three years. If you’re using the whole first year to bring students up to speed, it’s harder to get them to a position where they can start a PhD or go into industry over the next two years. The best undergraduates—the ones who performed the best at the end of their three-year course—were the ones who weren’t just programming when they’d been told to for their weekly assignment or for a class project. They were the ones who were programming in their spare time. So the initial idea behind the Raspberry Pi was a very parochial one with a very tight (and pretty unambitious) focus: I wanted to make a tool to get the small number of applicants to this small university course a kick start. My colleagues and I imagined we’d hand out these devices to schoolkids at open days, and if they came to Cambridge for an interview a few months later, we’d ask what they’d done with the free computer we’d given them. Those who had done something interesting would be the ones that we’d be interested in having in the program. We thought maybe we’d make a few hundred of these devices, or best case, a lifetime production run of a few thousand.

Of course, once work was seriously underway on the project, it became obvious that there was a lot more we could address with a cheap little computer like this. What we started with is a long way indeed from the Raspberry Pi you see today. I began by...