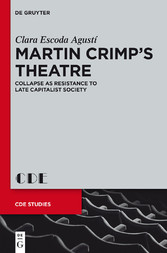 This book is a timely intervention in theatre studies which reads Martin Crimp's plays in the context of contemporary, late capitalist societies of control or of 'spectacle', and explores how female collapse in particular works as a form of denunciation of the violence of globalized, free-market economy. It contends that Crimp can best be understood as a post-Holocaust playwright, and it will be of interest to both specialists in Crimp and theatre studies, and to anyone interested in gaining a deeper understanding of Crimp's dramaturgy.