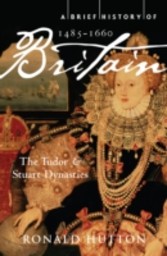 From the death of Richard III on Bosworth Field in 1485 to the execution of Charles I, after the Civil Wars of 1642-48, England was transformed by two Dynasties. Firstly the Tudors, who won the crown on the battlefield and changed both the nature of kingship but also the nation itself. England became a Protestant nation and began to establishment itself as a trading power, facing down impossible odds it defeated its enemies on land and sea. Yet after a century Elizabeth I died with no heir and the crown was passed to the Stuarts, who were keen to remould the kingdom in their own image. Leading Historian, Ronald Hutton brilliantly recreates the political landscape over this early modern period and shows how the modern nation was forged in these anxious, transformative years. Combining skilful pen portraits of the leading figures, culture, economics and accounts of everyday life, he reveals insights in this key era in our nation's story. This the second book in the four volume Brief History of Britain which brings together some of the leading historians to tell our nation's story from the Norman Conquest of 1066 to the present-day. Combining the latest research with accessible and entertaining story telling, it is the ideal introduction for students and general readers.