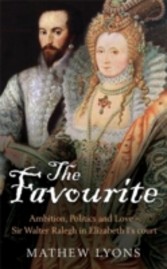 When the adventurer Walter Ralegh first encountered Elizabeth I he supposedly placed his cloak over a puddle and allowed the queen to walk across it. Thus began one of the most intriguing relationships between a monarch and her favourite. The Favourite explores the labyrinthine complexity of human emotion, ambition and ritual within the restricted confines of the Tudor court. Was the favourite a Machiavellian schemer who fooled the queen in her affections? Was Elizabeth willing to manipulate her courtier for her own ends? The Queen's affection for Ralegh would protect him but he would soon become the 'most hated man in England'. In The Favourite, Mathew Lyons reveals a new portrait of an immortal relationship and a fascinating exploration of the many layers of love between Gloriana and Ralegh - courtier, chancer and privateer.