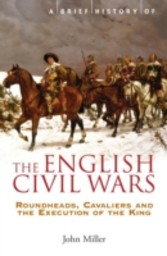 The English Civil War is one of the most hotly contested areas of English History and John Miller is one of the experts on the period. Amid dramatic accounts of the key battles and confrontations, Miller explores what triggered the initial conflict between crown and parliament and how this was played out in England, Scotland and Ireland in the lead-up to war. As the war developed, personalities and innovations on the battlefield became increasingly important, culminating in the rise of Oliver Cromwell and the radical New Model Army. The wars changed the political, social, religious and intellectual landscape of the country for ever. Using a lifetime's knowledge and study on the period, John Miller brings this extraordinary turning point in British history to life.