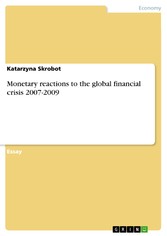 Essay from the year 2009 in the subject Business economics - Economic Policy, University of Dusseldorf 'Heinrich Heine', language: English, abstract: For the last couple of years the world has been experiencing one of the most severe financial crises ever which has been often compared to the Great Depression from 1929. The crisis began with the downturn of the subprime housing market in the USA in 2007 and spread all over the planet. The negative effects of the Global Financial Crisis from 2007-2009 are both financial and real. The financial impact of the crisis resulted in problems in the banking systems of many countries. The real impact was that the economic growth has slowed down. The crisis brought many challenges and questions concerning the ability of the industries in the national economies to survive, the destiny of the employees and the role of the government in the current market situation. However, the crisis might create opportunities for some industries if the companies don't let themselves to be misled by the general negative moods towards the current state of the market.[...]