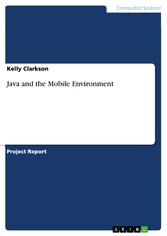 Java and the Mobile Environment

Java and the Mobile Environment

Project Report from the year 2012 in the subject Computer Science - Software, grade: A, University of Cambridge, language: English, abstract: Java is considered a unique language and many of its properties are also found in other languages. The extensive usage of Java language by programmers indicates that the Sun Microsystems have founded the right amalgam of sophistication and functionality. Java is actually derived from C++ language which increases the complexity of software with its features. However, the origin of Java is C++ and it uses many of its features by eliminating the drawback found in origin language. Java has eliminated direct memory access, pointers, multiple inheritance and pointers etc. Java was integrated with the support for World Wide Web and made it lucrative for the purpose of programming over network. One of the main benefits which is associated with Java language is object orientation. Primitive languages such as Pascal, C and Basic are referred as procedural languages. These languages however offer the programming facilities to devise the software but they do not provide them in efficient way and do not provide robustness in nature. While Java devise software by keeping the concept of objects and classes under consideration. Classes contain the member of class along with the data and methods which further work upon the data. Java is actually object oriented in nature, however; there also exist many other object oriented languages such as Visual Basic, C++, Smalltalk and Delphi. (Reilly, Reilly, 2002) Programmers happily adopt object oriented languages as they provide safety and ease as compared primitive procedural languages. One of the positive aspects of Java language is its simplicity as programmers refrain from using C++ due to complexity as it allows the direct memory access, dangling pointers and explicit memory de-allocation and allocation for structures and objects. Furthermore, Java supports inheritance but disallow the multiple inheritances. Java has been integrated with the automatic garbage collection which prevents the memory waste. In C and C++, the memory for structures and objects is allocated and after usage, memory is de-allocated otherwise the allocated memory may cause memory leakage. Java satisfies the basic principles of object orientation such as encapsulation, inheritance, abstraction and polymorphism (Hunt, 2002) Java basically runs under the virtual environment which incorporates it in every operating system, this is why Java is compatible with Linux, Mac and Windows.