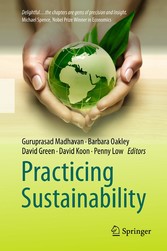 Sustainability applies to everybody. But everybody applies it differently, by defining and shaping it differently-much as water is edged and shaped by its container. It is conceived in absolute terms but underpinned by a great diversity of relatively 'green'-and sometimes contradictory-practices that can each make society only more or less sustainable. In Practicing Sustainability, chefs,Â poets, music directors, evangelical pastors, skyscraper architects, artists, filmmakers, as well as scientific leaders, entrepreneurs, educators, business executives, policy makers, and the contrarians, shed light on our understanding of sustainability and the role that each of us can play. Each contributor addresses what sustainability means, what is most appealing about the concept, and what they would like to change to improve the perception and practice of sustainability. What emerges from their essays is a wide spectrum of views that confirm an important insight: Sustainability is pursued in different ways not only due to different interpretations, but also because of varying incentives, trade-offs, and altruistic motives. Practicing and achieving sustainability starts with a willingness to look critically at the concept.Â It also means enabling rich and vigorous discussion based on pragmatism and common sense to determine a framework for best ideas and practices. With time and the much needed critical thinking, sustainable development will become a more integral part of our culture.Â By sharing experiences and crisp insights from today's savants, Practicing Sustainability serves as a stepping stone to the future.

Barbara Oakley (Editor) is an associate professor of engineering at Oakland University in Rochester, Michigan, and a former vice-president of the IEEE Engineering in Medicine and Biology Society.

David Green (Editor) is a MacArthur Fellow, Ashoka Fellow and is recognized by the Schwab Foundation as a leading social entrepreneur.

David Koon (Editor) represented the 135th district of the New York State Legislative Assembly from 1996 to 2010.

Penny Low (Editor) is a Member of Parliament of Singapore, and was the youngest elected female representative in 2001.

Michael Spence (Foreword) is William R. Berkley Professor in Economics and Business at New York University, and recipient of the 2001 Nobel Memorial Prize in Economic Sciences.

Klaus Schwab (Editorial) is founder and executive chairman of the World Economic Forum.

Robert Rubin (Editorial) is Co-Chairman of the Council on Foreign Relations. He served as the 70th Secretary of the U.S. Treasury.

George Whitesides (Editorial) is Woodford L. and Ann A. Flowers University Professor of Chemistry and Chemical Biology at Harvard University.
M. S. Swaminathan (Afterword) is a Member of the Indian Parliament (Rajya Sabha) and a World Food Prize Laureate.