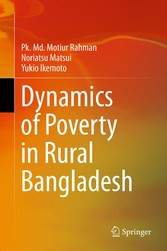 Dynamics of Poverty in Rural Bangladesh

Dynamics of Poverty in Rural Bangladesh

The study of poverty dynamics is important for effective poverty alleviation policies because the changes in income poverty are also accompanied by changes in socioeconomic factors such as literacy, gender parity in school, health care, infant mortality, and asset holdings. In order to examine the dynamics of poverty, information from 1,212 households in 32 rural villages in Bangladesh was collected in December 2004 and December 2009. This book reports the analytical results from quantitative and qualitative surveys from the same households at two points of time, which yielded the panel data for understanding the changes in situations of poverty.
Efforts have been made to include the most recent research from diverse disciplines including economics, statistics, anthropology, education, health care, and vulnerability study. Specifically, findings from logistic regression analysis, polychoric principal component analysis, kernel density function, income mobility with the help of the Markov chain model, and child nutrition status from anthropometric measures have been presented.
Asset holdings and liabilities of the chronically poor as well as those of three other economic groups (the descending non-poor, the ascending poor, and the non-poor) are analyzed statistically. The degrees of vulnerability to poverty are examined by years of schooling, landholding size, gender of household head, social capital, and occupation. The multiple logistic regression model was used to identify important risk factors for a household's vulnerability.
In 2009, some of the basic characteristics of the chronically poor were: higher percentage and number of female-headed households, higher dependency ratio, lower levels of education, fewer years of schooling, and limited employment. There was a low degree of mobility of households from one poverty status to another in theÂ  period 2004-2009, implying that the process of economic development and high economic growth in the macroeconomy during this time failed to improve the poverty situation in rural Bangladesh.