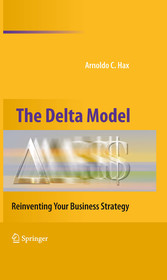 Strategy is the most central issue in management. It has to do with defining the purpose of an organization, understanding the market in which it operates and the capabilities the firm possesses, and putting together a winning plan. There are many influential frameworks to help managers undertake a systematic reflection on this issue. The most dominant approaches are Michael Porter's 'Competitive Strategy' and the 'Resource-Based View of the Firm,' popularized by Gary Hamel and C.K. Prahalad. Arnoldo Hax argues there are fundamental drawbacks in the underlying hypotheses of these approaches in that they define strategy as a way to achieve sustainable competitive advantage. This line of thinking could be extremely dangerous because it puts the competitor at the center and therefore anchors you in the past, establishes success as a way of beating your competitors, and this obsession often leads toward imitation and congruency. The result is commoditization - which is the worst outcome that could possibly happen to a business.
The Delta Model is an extremely innovative view of strategy. It abandons all of these assumptions and instead puts the customer at the center. By doing that it allows us to be truly creative, separating ourselves from the herd in pursuit of a unique and differentiated customer value proposition. Many years of intense research at MIT, supported by an extensive consulting practice, have resulted in development of powerful new concepts and practical tools to guide organizational leaders into a completely different way of looking at strategy, including a new way of doing customer segmentation and examining the competencies of the firm, with an emphasis on using the extended enterprise as a primary way of serving the customer. This last concept means that we cannot play the game alone; that we need to establish a network among suppliers, the firm, the customers, and complementors - firms that are in the business of developing products and services that enhance our own offering to the customer. Illustrated through dozens of examples, and discussion of application to small and medium-sized businesses and not-for-profits, the Delta Model will help readers in all types of organizations break out of old patterns of behavior and achieve strategic flexibility -- an especially timely talent during times of crisis, intense competition, and rapid change.

Dr. Hax is a native of Chile, where he received his undergraduate degree in Industrial Engineering, with highest honors. Subsequently, he received his M.S. at the University of Michigan, and his Ph.D. at the University of California, Berkeley. Prior to joining M.I.T. in 1972, he was a member of the faculty at the Harvard Business School, and a senior consultant for Arthur D. Little, Inc.

He has published extensively in the fields of strategic management, management control, operations management, and operations research. He has authored and coauthored nine books and some one hundred journal articles. An accomplished teacher, he won the Salgo Award for Excellence in Teaching at the Sloan School of Management. He has participated in a great many executive programs at M.I.T., in many U.S. universities and corporations, and in most countries in Europe and Latin America, as well as Japan, China, and the former U.S.S.R.

His books include: The Delta Project: Discovering New Sources of Profitability, coauthored with Dean Wilde (Palgrave, 2001); Strategic Management: An Integrative Perspective: An Integrative Perspective (Prentice-Hall, 1984) and The Strategy Concept and Process: A Pragmatic Approach (Prentice-Hall, 1995), both coauthored with Nicolas Majluf; Production and Inventory Management, coauthored with Dan Candea (Prentice-Hall, 1983), which received the Institute of Industrial Engineers-Joint Publishers Book-of-the-Year Award; Applied Mathematical Programming, coauthored with Stephen Bradley and Thomas Magnanti (Addison-Wesley, 1977); and he edited Readings in Strategic Management (Ballinger, 1984) and Planning Strategies That Work (Oxford, 1987). He contributed a chapter on corporate strategy, with Nicolas Majluf, to the Encyclopedia of Operations Research and Management Science, 2/e (Gass and Harris, eds., Kluwer/Springer, 2001). He is Strategic Management Editor for Interfaces, and former editor of Operations Research and Naval Research Logistics Quarterly. He is on the editorial board of the Journal of Manufacturing and Operations Research and the Journal of High Technology Management Research.