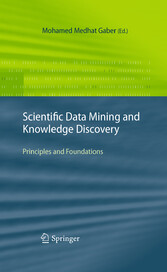 Mohamed Medhat Gaber 'It is not my aim to surprise or shock you - but the simplest way I can summarise is to say that there are now in the world machines that think, that learn and that create. Moreover, their ability to do these things is going to increase rapidly until - in a visible future - the range of problems they can handle will be coextensive with the range to which the human mind has been applied' by Herbert A. Simon (1916-2001) 1Overview This book suits both graduate students and researchers with a focus on discovering knowledge from scienti c data. The use of computational power for data analysis and knowledge discovery in scienti c disciplines has found its roots with the re- lution of high-performance computing systems. Computational science in physics, chemistry, and biology represents the rst step towards automation of data analysis tasks. The rational behind the developmentof computationalscience in different - eas was automating mathematical operations performed in those areas. There was no attention paid to the scienti c discovery process. Automated Scienti c Disc- ery (ASD) [1-3] represents the second natural step. ASD attempted to automate the process of theory discovery supported by studies in philosophy of science and cognitive sciences. Although early research articles have shown great successes, the area has not evolved due to many reasons. The most important reason was the lack of interaction between scientists and the automating systems.