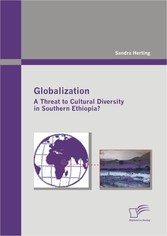 Globalization: A Threat to Cultural Diversity in Southern Ethiopia?

Globalization: A Threat to Cultural Diversity in Southern Ethiopia?

There are numerous ethnic groups in southern Ethiopia of which most also speak their own language and have distinct cultural trades. But how would the future of the different ethnic groups and their cultural heritage look like in the face of globalization processes? Is this cultural and linguistic diversity now diminishing through globalization processes and becoming replaced by a homogenous 'global culture'?
This study examines whether the cultures of southern Ethiopia are being penetrated by American popular culture, local cultural products are threatened with extinction and whether traditional lifestyles are becoming abandoned because the people of south Ethiopia are increasingly becoming part of a 'global consumer culture'. What about 'modernization' efforts by development projects and the global spread of formal education through schooling, do they contribute to the elimination of indigenous knowledge systems? And does the spread of the English language already constitute a threat to linguistic diversity? Moreover, the impacts of the arrivals of international tourists and of Christian missionary organizations on the cultures of the different ethnic groups are being examined.

Sandra Herting, born in 1980 in Germany, graduated with a Master of Arts in International Relations Online from Freie UniversitÃ¤t Berlin in 2010. Besides working as a civil servant, she voluntarily works for an organization to support the rights of indigenous peoples.