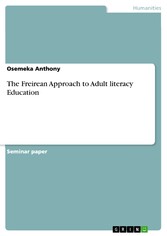 Seminar paper from the year 2009 in the subject Psychology - Learning Psychology, Intelligence Research, grade: A, Atlantic International University, course: Master degree Program, language: English, abstract: The Freirean approach to adult literacy education centre on learners' cultural and personal experiences. Freirean was the name for Brazilian educator Paulo Freire, the approach is also referred to as the problem-posing approach (Auerbach & Wallerstein, 1987;Wallerstein, 1983), the psycho-social approach (Hope, Timmel, & Hodzi, 1984; Fargo, 1981), the learner-centered approach (Anorve, 1989), the liberatory approach (Shor & Freire, 1987; Facundo, 1984), and the participatory approach (Jurmo, 1987). It has been used in the developing world in successful native and second language literacy projects sponsored by governments and international voluntary organizations in both rural and urban settings. In the United States, many community-based organizations have used the approach in their nonformal educational programs for developing basic literacy in English, native languages other than English, and English as a second language. Because the Freirean approach goes by a number of different names and Freire's ideas have had such an impact on adult education internationally, there are many literacy educators in the United States who have incorporated elements of the approach into their teaching without realizing that they have been influenced by Paulo Freire. In Freirean terms, culture 'includes how people labor, create, and make life choices' (Wallerstein, 1983, p. 5). Culture is not a static set of customs, religious beliefs, social attitudes, forms of address and attire, and foods; rather, it is a dynamic process of transformation and change laden with conflicts to resolve and choices to be made both individually and as a community. Jurmo (1987) categorizes Freire as an exponent of 'literacy for social change' because Freire argues that unjust social conditions are the cause of illiteracy and that the purpose of adult basic education is to enable learners to participate actively in liberating themselves from the conditions that oppress them. This liberatory aspect of Freire's philosophy is important for program management as well as for learning. Many programs following the Freirean approach have adopted management structures that give students significant control over the direction of present and future educational activities (Jurmo, 1987; Collins, Balmuth, & Jean, 1989).