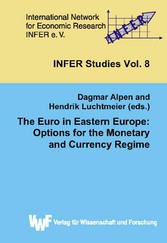 The Euro in Eastern Europe: Options for the Monetary and Currency Regime. 4th INFER Workshop on Financial Markets, March 2003

The Euro in Eastern Europe: Options for the Monetary and Currency Regime. 4th INFER Workshop on Financial Markets, March 2003

ERM-II Anchoring on the Way to EMU: More Notional than Real Effects for the Accession Countries? (S. 69-70)

With the creation of EMU, it seems that the exchange rate question in Europe has shifted from the core to the periphery and, nowadays, the emphasis has to be put on the foreign exchange relationships between the EMU Ins and the Outs. The so-called Exchange Rate Mechanism II (ERM-II) is intended to provide an institutional framework for organizing the links between the euro and the currencies of the European Union members, which do not take part of EMU from January 1st 1999 on. More specifically, the countries involved in the European Union enlargement process are also concerned by the ERM-II in so far as they have to define a specific exchange rate strategy in the perspective of their future adhesion to the monetary union.

A lot remains to be known, however, about the precise features of such a mechanism. To focus only on European Union countries, and even after the Danish and the Greek authorities had decided to let their currencies participate in the ERM-II1, the number and the name of other participating countries is still an open issue, notably as regards Sweden and the UK. Furthermore, and as reaffirmed in the Amsterdam Treaty (June 1997), the requirements for being eligible to enter the euro area do not concern only the stabilization relative to the euro. With respect to the exchange rate criterion, the emphasis may also be put on the convergence of the candidateâs inflation rate to the EMU standard since direct inflation targeting may contribute to exchange rate pegging through the manipulation of the domestic interest rates.

All in all, such a vague schedule suggests a variety of alternatives regarding the behavior of the currencies of the (current and next) possible, future EMU Ins countries. In particular, with respect to the EU enlargement process, it seems important to evaluate whether this exchange rate mechanism can be associated with a genuine management of the exchange rate or if it should be considered as an empty shell (except from an institutional viewpoint). Indeed, the opportunity of a shadow anchoring strategy (to the ERM-II) for the Accession countries, as well as their likely participation in this system (from mid 2004 on), would be partly contingent on the stabilizing properties (if any) of such a mechanism. As a consequence, one of the key issues lies in assessing whether the framework, which underlies the new ERM may be regarded as a truly effective mechanism with respect to exchange rate stability. This implies to consider not only the policies that the monetary authorities would undertake within this system but also the expectations that the market may formulate on them, as both factors are crucial in determining the impact of the exchange rate regime on the nominal exchange rate dynamics.

In this respect, this paper is primarily concerned with a market-based assessment of the setting up and early practice of the ERM-II (1999-2000). The objective is to use this empirical evidence to draw possible lessons for the future membership of this mechanism by the Accession countries. To this aim, a two-fold perspective is adopted: First, we examine the empirical evidence on ERM-II (1999-2000). We want to analyze, in turn, how the expected and then current functioning of the ERM-II has been perceived by the market, whether this market assessment has affected in a significant way the dynamics of the EU currencies and, finally, if we could detect in the data any effect arising from the participation into the ERM-II. In a nutshell, we want to assess whether the creation and the early functioning of the ERM-II has been associated with more real than notional effects on the dynamics of the concerned, nominal exchange rates.