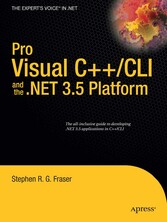 In the previous version of this book I said that coding a Web application was not possible. I later found out I was wrong and I will show you how in Chapter 17. Console Applications Console applications are basically extinct as a final software delivery in the Windows world. Okay, developers and administrators still use them a lot, but the average nontechnical user has GUI-based applications as their final delivery. For developer tools, there is nothing like them. If you need to figure out how to do something, write out a console application.

Since .NET version 2.0, you can use MFC and Windows Forms somewhat interchangeably, but if you do, the generated assembly will be classified as unsafe. When you create Windows Forms, you will use the massive System::Windows::Forms namespace. Though this namespace is large, it is consistent and well laid out. It will not take you long to get good at using it.

Just to add some variety to your Windows applications, .NET also provides a new and improved Graphical Device Interface (GDI) called, conveniently, GDI+. With GDI+, you can play with fonts, change colors, and, of course, draw pictures. GDI+ is almost worth learning just for one class, System::Drawing::Image, which allows an application to load almost any commonly supported graphic file formats, including GIF, JPEG, and BMP, into memory, where they can be manipulated and drawn to the screen. To implement GDI+ in the .NET Framework, you need to explore the System::Drawing namespace. I cover GDI+ in Chapter 12.