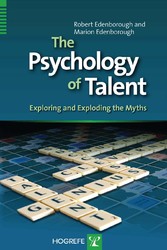 The Psychology of Talent - Exploring and Exploding the Myths

The Psychology of Talent - Exploring and Exploding the Myths

Such a case as that just outlined is rather similar to those to do with peer pressure, a powerful force as witnessed by some of the early experiments in which people were persuaded not to believe the evidence of their own eyes. A classic piece of research was that by Asch (1956), in which people were asked to state which of three lines was the same length as the standard one. Accomplices of the researcher, who were in the majority, gave the wrong answer and the solo real subject of the experiment followed suit. Other, field-based work demonstrated the effectiveness of peer pressure in a more apparently talent-related context. For example, Krech, Crutchfield, and Ballochy (1962) reported a study in which through cooperation with the researcher, a group of young men in a US college treated a shy girl student as a social favourite. She was invited to all the important college social events and generally made a fuss of. She developed an easy and confident social manner, which was sustained when the contrived social support had ceased.

There are, perhaps, some interesting lessons to be drawn from the world of coaching, and indeed, the example of the CEO and Jim might be seen as a very short-cut form of coaching. Again in sports the coach is positioned as a key developer of ânaturalâ talent, not a remedial specialist. In other fields, such as business, the picture was for a long time less clear. For a top manager or director to have a coach was seen as an admission of failings rather than an attempt to bring about the realisation of the capacity for top-level performance. This situation has changed somewhat, with coaches more freely admitted in every sense. The use of coaching in situations such as âon-boardingâ and âfirst 90 daysâ coaching still have something of a ring of novelty about them, although such occasions and other employment rites of passage, such as a promotion, are now more commonly seen as providing accepted opportunities for coaching.

Focusing on talents is nothing new, in principle, but it is not by any means routinely done. The earliest, or at least best known early, conceptualisation of this is in the Christian New Testament in the parable of the talents where the two âgood and faithful servantsâ double their masterâs wealth through trade.

Can Talents Be Overplayed?

There appear to be two distinct strands of thinking on the question as to whether or not talents can be overplayed. First is the somewhat confused one of those situations in which a âtalentedâ person is pointed out as having one or more areas of weakness, meaning at an extreme that they cannot function normally without substantial support. The absent-minded professor is one stereotype here, and the reality of this type of pattern is shown in the autistic savants with little or no social skills and massive intellectual abilities in areas such as the recall of events and numbers. Along the way are people like the professional tenor soloist due to sing at a performance of a new requiem. He turned up for his one rehearsal on the Saturday afternoon with a performance due that evening and asked the composer to get his performance trousers and shirt cleaned for him, not having managed to organise that himself since his last performance. That the areas of ability and lack of ability are correlated in these cases seems to be beyond doubt. What is not clear is that, say, the professorâs expertise in and preoccupation with his science causes the absence of mind. Also, if he â or she, though it is undoubtedly a male stereotype â were less adept in his science, but equally absent-minded, would he be more or less effective, that is, more or less talented altogether? The answer is surely less.

The second strand is represented by those situations in which one area is seen as so extreme as to become a liability. Examples would be a level of energy that leaves colleagues exhausted or an analytical ability that means others have difficulty following the intricacies of an argument.

These ideas are embodied in a number of personality and other measures. For example, with the Hogan Personality Inventory (see, e.g., Hogan, Hogan, & Warrenfeltz, 2007), there are warnings of negative consequences that can be associated with high scores on each of its 7 scales. With Strengthscope, which we shall discuss further in Chapter 7, it is argued by the authors that if collaboration is very strong, it could lead to a tendency to consult even when the urgency of a situation means that it is inappropriate to do so. However, other dimensions within the whole picture, such as results focus in this case, could well mitigate this effect. Thus, although there may be a risk associated with high levels of a talent, we would argue that holding out for high levels and taking note of the total pattern of talent is likely to produce the best results.

The context can also be of significance in considering when a talent may be perceived as such and when it might function as a liability, leading on from the points about talent being overplayed just discussed. Consider the case of the person with a talent for painstaking detail in analysis, not prepared to reach a conclusion until he or she had examined 99.9% of the possible information, uncovering tell-tale signs, and following them through to natural conclusions. Such a person might, for instance, fit well into the environment of forensic accountancy, where their talent would result in the outcome of uncovering fraudulent behaviour. This pattern of behaviour might be a decided non-talent in a different financial field, say in acting as an administrator to a company in difficulties, where performance might only be optimised by selling off certain assets very quickly, before their value declined.

Consider the view, âwe donât want all prima donnas, we need some plodders,â a view that no longer surprises us, as we have come across it too often for that. Does exceptional talent not often manifest itself in prima donnas? And would we want to pay a lot of money to watch a ballet or a football game where all the players were congenial plodders?

Yet another concept is that of the âbalanced scorecardâ (Kaplan & Norton, 1996). This was originally developed to look at organisational performance over a number of facets: customer perspective, internal perspective, innovation and learning perspective, and financial perspective. Variants of the approach have since been applied in considering the constituents of individual performance.