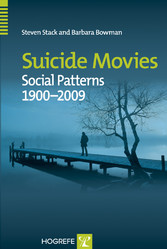 How is suicide portrayed in the cinema and what does it mean for suicide prevention? The first-ever comprehensive study of film suicide analyzes more than 1,500 film suicides. The portrayal of suicide in cinema can impact public understanding and effective prevention of suicide. This book presents the first-ever comprehensive analysis of how suicide has been portrayed in films over 110 years, based on a thorough evaluation of more than 1,500 film suicides â 1,377 in American films, 135 in British films. One striking finding is that while the research literature generally attributes suicide to individual psychiatric or mental health issues, cinema and film solidly endorse more social causes. In a compelling blend of social science and humanities approaches, the authors use quantitative methods, as well as the voices of scriptwriters, directors, actors, and actresses, dozens of illustrative frame-grabs, and numerous case examples to answer core questions such as: Are we guilty of over-neglecting social factors in suicide prevention and research? Do cinematic portrayals distort or accurately reflect the nature of suicide in the real world? Has film presentation of suicide changed over 110 years? What are the literary roots of cinema portrayals? This unique book makes fascinating reading for all concerned with suicide prevention, as well as areas such as sociology, film and media studies, and mass communication.