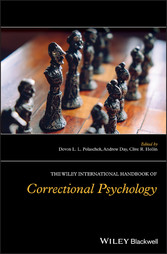 Notes on the Contributors

Ronald H. Aday, PhD is a Professor of Sociology and Director of the Graduate Program in Gerontology at Middle Tennessee State University. An international scholar on the topic of aging and health issues in the field of correction, Aday has contributed significantly to the public policy debate on older offenders. His research on older prisoners has spanned more than 4 decades, resulting in more than 65 refereed articles and book chapters. He is the author of Aging Prisoners: Crisis in American Corrections (2003) and coâauthor of Women Aging in Prison. He is also the coâauthor of a forthcoming book near completion on the Life of Women Lifers.

Geraldine Akerman is a chartered and HCPC (Health and Care Professions Council) Registered Forensic Psychologist, EuroPsych, and Associate Fellow of the British Psychological Society. She sits on the British Psychological Society's Division of Forensic Psychology Executive Committee and the National Organisation for the Treatment of Abusers Research Committee. She is a Trustee for the Safer Living Foundation. Geraldine has academic publications on offenseâparalleling behavior, managing deviant sexual fantasies and offending, and exâservice personnel in prison and edited a book on enabling environments. Geraldine currently works as a therapy manager at HMP Grendon in the UK.

Alfred Allan qualified in law and psychology and is registered with clinical and forensic endorsements in Australia. Professor Allan has taught law, psychology, and professional ethics in South Africa and Australia. He is a member of the inaugural Psychologists Board of Australia, a director and the Chair of the Standing Committee on Ethics of the International Association for Applied Psychology (IAAP), and a Fellow of the Australian Psychological Society (APS). He is on the editorial committee of Psychiatry, Psychology and Law and the editorial board of Philosophy, Ethics, and Humanities in Medicine, and Ethics & Behavior.

Danyal Ansari, BA (Hons), is currently undertaking training as a Clinical Associate in Applied Psychology and is employed with NHS Greater Glasgow & Clyde. His work focuses on providing cognitive behavioral therapy for individuals experiencing common mental health problems. He has previously worked with individuals with intellectual and developmental disability, and with autism, where he provided clinical and forensic input to the service.

Rebecca L. Bauer is a licensed Psychologist who received her PhD in counseling psychology from Texas Tech University. She previously worked as a staff psychologist for the Federal Bureau of Prisons. Currently, she is in private practice conducting forensic evaluations. Her research interests include correctional mental health.

Erica Bowen is Professor of Violence Prevention Research at the University of Worcester, UK. Erica is a Registered Forensic Psychologist (Health and Care Professions Council) and a Chartered Psychologist and Associate Fellow of the British Psychological Society. Her research for the past two decades has focused on understanding and preventing intimate partner violence in adult and adolescent relationships. Erica has developed innovative interventions including a seriousâgameâbased primary intervention to combat adolescent dating violence, and a brief intervention for preventing domestic violence in adult relationships used primarily for nonâcourt mandated clients.

Sarah Brown is a Professor of Forensic Psychology in the Centre for Advances in Behaviour Science at Coventry University, UK. She has been conducting research related to sexual aggression for over 20âyears and has been working at Coventry University since 1999. Sarah is the ChairâElect of NOTA, the National Organisation for the Treatment of Abusers. She is an Associate Editor ofâChild Abuse and Neglect and a member of the editorial board ofâSexual Abuse and theâJournal of Sexual Aggression, having been the Editor of the latter journal from 2008 to 2014. Sarah is a member of the Advisory Board of the new Centre for Expertise on Child Sexual Abuse that is funded by the UK Home Office and was launched in 2017.

Shelley L. Brown is an Associate Professor of Forensic Psychology in the Department of Psychology at Carleton University in Canada, which she joined in 2006, after a 10âyear research career with Correctional Service of Canada. She completed a PhD in 2002 at Queens University on dynamic risk assessment among adult male offenders. Since then her main research focus has been improving gender responsive services for girls and women in the criminal justice system using a mix of quantitative and qualitative approaches. The Criminal Justice Section of the Canadian Psychological Association awarded Shelley (jointly with Kelley Blanchette) a significant contribution award for their work on female criminal conduct.

Sharon Casey, PhD, holds a conjoint appointment at Deakin University, Australia, in the School of Psychology. She is widely published in many areas of forensic psychology and has a particular interest in offender rehabilitation. Her research interests include substance use, juvenile offending, and scale development and validation. She has worked extensively with correctional agencies both in Australia and overseas in the development, provision, and evaluation of offender rehabilitation programs and the provision of staff training.

Nick Chadwick, MA, is a PhD candidate in forensic psychology at Carleton University, Ottawa, Canada. He has conducted research projects on the use and implementation of evidenceâbased practices in community supervision as well as the utility of dynamic risk assessment and incorporating offender change in the prediction of recidivism.

Maartje Clercx studied psychology at Maastricht University, the Netherlands. She then obtained her master's degree in forensic psychology from Maastricht University as well. She is mainly interested in juvenile and adult psychopathy, and has worked for Dr. Lieke Nentjes and conducted research on the comprehensive assessment of psychopathic personality in collaboration with Professor David Cooke. Currently she is working as a junior researcher at Maastricht University, where she mainly concentrates on the randomized controlled trial of Professor David Bernstein. Maartje is currently working toward finding a suitable PhD position, preferably on the topic of psychopathy.

David J. Cooke is a Consultant Forensic Clinical Psychologist and former Head of the Forensic Clinical Psychology service in Glasgow, UK. He is a Visiting Professor in the Faculty of Psychology at the University of Bergen in Norway and an Adjunct Professor in the Faculty of Law at La Trobe University, Melbourne, Australia. He undertakes research on psychopathic disorder, the risk management of violent offenders, and the impact of institutional settings on violent and disturbed behavior. He has published widely in the field and he serves on a number of editorial boards and expert groups.

Raymond R. Corrado is a Professor in the School of Criminology at Simon Fraser University, Canada, a visiting Fellow at Clare Hall College and the Institute of Criminology, University of Cambridge, UK, and founding member of the Mental Health, Law, and Policy Institute at Simon Fraser University. He is on the editorial boards of six major criminology and forensic mental health journals, has coâedited nine books, and published over 150 articles, book chapters, and reports on youth/juvenile justice, violent young offenders, mental health, adolescent psychopathy, Aboriginal victimization, child/adolescent case management strategies, and terrorism. He received his PhD from Northwestern in Chicago.

Michael Daffern is Professor of Clinical Forensic Psychology with the Centre for Forensic Behavioural Science, Swinburne University of Technology, and Consultant Principal Psychologist with the Victorian Institute of Forensic Mental Health (Forensicare), Australia. He divides his time between teaching, clinical practice, and research, the focus of which is the assessment and treatment of violent offenders.