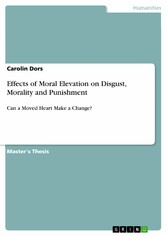 Effects of Moral Elevation on Disgust, Morality and Punishment - Can a Moved Heart Make a Change?

Effects of Moral Elevation on Disgust, Morality and Punishment - Can a Moved Heart Make a Change?


Master's Thesis from the year 2013 in the subject Psychology - Social Psychology, grade: 7,5, VU University Amsterdam (Psychologie), language: English, abstract: Haidt (2003) conceptualizes moral elevation and moral disgust as contrasting emotions at the opposite ends of a 'moral purity' dimension. The current paper investigates whether this concept holds true and elevation and disgust are counteracting emotions, e.g., if elevation has diametric effects compared to disgust. As disgust has shown a strengthening effect on morality (Wheatley & Haidt, 2005), the present research examines the influence of elevation on moral judgment and punishment, too. However, evidence in previous research for effects of elevation is contradictory. Thus, in Study 1, we tested in an initial, cross-sectional approach the association of empathy (theorized as 'trait elevation') and disgust sensitivity with pro-social behavior, respectively volunteer work. Empathy was a significant predictor for volunteer work experience. Domains of disgust showed diametric effects: More moral disgust and less pathogen disgust sensitivity were also significant predictors. Study 2 focused primarily on moral elevation as an affective, emotional state and was conducted as a lab-study. We tested three conditions (moral elevation, an amusement condition to control for positive affect, and a neutral condition) on pathogen disgust, moral judgment and punishment motivation. No differences between the conditions were observed. Explanations for the findings are discussed.