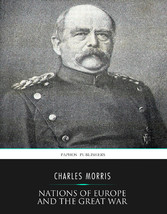 Nations of Europe and the Great War

Nations of Europe and the Great War

ALL EUROPE PLUNGED INTO WAR

AT THE OPENING OF THE final week of July 1914, the whole worldâwith the exception of Mexico, in which the smoldering embers of the revolution still burnedâwas in a state of profound peace. The clattering hammers and whirling wheels of industry were everywhere to be heard; great ships furrowed the ocean waves, deep-laden with the worldâs products and carrying thousands of travelers bent on business or enjoyment. Countless trains of cars, drawn by smoke-belching locomotives, traversed the long leagues of iron rails, similarly laden with passengers engaged in peaceful errands and freight intended for peaceful purposes. All seemed at rest so far as national hostile sentiments were concerned. All was in motion so far as useful industries demanded service. Europe, America, Asia and Africa alike had settled down as if to a long holiday from war, and the advocates of universal peace were jubilant over the progress of their cause, holding peace congresses and conferences at The Hague and elsewhere, and giving Nobel prizes of honor even to so questionable an advocate of peace as Theodore Roosevelt, the redoubtable Colonel of the Rough Riders.

Such occasions occur at frequent intervals in nature, in which a deep calm, a profound peace, rests over land and sea. The winds are hushed, the waves at rest; only the needful processes of the universe are in action, while for the time the world forgets the chained demons of unrest and destruction. But too quickly the chains are loosened, the winds and waves set free; and the hostile forces of nature rush over earth and sea, spreading terror and devastation in their path. Such energies of hostility are not confused to the elements. They exist in human communities. They underlie the political conditions of the nations, and their outbreak is at times as sudden and unlooked-for as that of the winds and waves. Such was the state of political affairs in Europe at the date mentioned, apparently calm and restful, while below the surface hostile forces which had long been fomenting unseen were ready to burst forth and whelm the world.

Dramatic Suddenness of the Outbreak

On the night of July 25th the people of the civilized world settled down to restful slumbers, with no dreams of the turmoil that was ready to burst forth. On the morning of the 26th they rose to learn that a great war had begun, a conflict the possible width and depth of which no man was yet able to foresee; and as day after day passed on, each day some new nation springing into the terrible arena until practically the whole of Europe was in arms and the Armageddon seemed at hand, the world stood amazed and astounded, wondering what hand had loosed so vast a catastrophe, what deep and secret causes lay below the ostensible causes of the war. The causes of this are largely unknown. As a panic at times affects a vast assemblage, with no one aware of its origin, so a wave of hostile sentiment may sweep over vast communities until the air is full of urgent demands for war with scarce a man knowing why.

What is already said only feebly outlines the state of consternation into which the world was cast in that fateful week in which the doors of the Temple of Janus, long closed, were suddenly thrown wide open and the terrible God of War marched forth, the whole earth trembling beneath his feet. It was the breaking of a mighty storm in a placid sky, the fall of a meteor which spreads terror and destruction on all sides, the explosion of a vast bomb in a great assemblage; it was everything that can be imagined of the sudden and overwhelming, of the amazing and incredible.

For the moment the world stood still, plunged into a panic that stopped all its activities. The chambers of finance throughout the nations were closed, to prevent that wild and hasty action which precipitates disaster. Throughout Europe trade, industry, commerce all ceased, paralyzed at their sources. No ship of any of the nations concerned dared venture from port, lest it should fall a prey to the prowling sea dogs of war which made all the oceans unsafe. The hosts of American tourists who had gone abroad under the sunny skies of peace suddenly beheld the dark clouds of war rolling overhead, blotting out the sun, and casting their black shadows over all things fair.

What does this state of affairs, this sudden stoppage of the wheels of industry, this unforeseen and wide spread of the conditions of war portend? Emerson has said: âWhen a great thinker comes into the world all things are at risk.â There is potency in this, and also in a variation of Emersonâs text which we shall venture to make: âWhen a great war comes upon the world all things are at risk.â Everything which we have looked upon as fixed and stable quakes as if from mighty hidden forces. The whole world stands irresolute and amazed. The steady-going habits and occupations of peace cease or are perilously threatened, and no one can be sure of escaping from some of the dire effects of the catastrophe.

The conditions of production vanish, to be replaced by conditions of destruction. That which had been growing in grace and beauty for years is overturned and destroyed in a moment of ravage. Changes of this kind are not confined to the countries in which the war rages or the cities which conquering columns of troops occupy. They go beyond the borders of military activity; they extend to far-off quarters of the earth. We quote from the New York World a vivid picture drawn at the opening of the great European war. Its motto is âall the world is paying the cost of the folly of Europe.â

Never before was war made so swiftly wide. News of it comes from Japan, from Porto Rico, from Africa, from places where in old days news of hostilities might not travel for months.

âNon-combatants in Argentina face ruin from the stoppage of their wheat trade. Peru declares a moratorium. China will miss her ginseng from the Virginia mountains, and must otherwise make medicine. Rubber tires go soaring in price. Boots will do the same while shoemakers shoot each other, and the commerce in hides is halted. Children the world over will miss their Nuremberg toys at Christmas.

âNon-combatants are in the vast majority, even in the countries at war, but they are not immune to its blight. Austria is isolated from the world because her ally, Germany, will take no chances of spilling military information and will not forward mails. If, telephoning in France, you use a single foreign word, even an English one, your wire is cut. Hans the German waiter, Franz the clarinettist in the little street band, is locked up as a possible spy. There are great German business houses in London and Paris; their condition is that of English and French business houses in Berlin, and that is not pleasant. Great Britain contemplates, as an act of war, the voiding of patents held by Germans in the United Kingdom.

âNothing is too petty, nothing too great, nothing too distant in kind or miles from the field of war to feel its influence. The whole world is the loser by it, whoever at the end of all the battles may say that he has won.â

Dilemma of the Tourists

Let us consider one of the early results of the war. It vitally affected great numbers of Americans, the army of tourists who had made their way abroad for rest, study and recreation and whose numbers, while unknown, were great, some estimating them at the high total of 100,000 or more. These, scattered over all sections of Europe, some with money in abundance, some with just enough for a brief journey, capitalists, teachers, students, all were caught in the sudden flurry of the war, their letters of credit useless, transportation difficult or impossible to obtain, all exposed to inconveniences, some to indignities, some of them on the flimsiest pretense seized and searched as spies, the great mass of them thrown into a state of panic that added greatly to the unpleasantness of the situation in which they found themselves.

While these conditions of panic gradually adjusted themselves, the status of the tourists continued difficult and annoying. The railroads were seized for the transportation of troops, leaving many Americans helplessly held in far interior parts, frequently without money or credit. One example of the difficulties encountered will serve as an instance which might be repeated a hundred fold.

Seven hundred Americans from Geneva were made by Swiss troops to leave a train. Many who refused were forced off at the point of guns. This compulsory removal took place at some distance from a station near the border, according to Mrs. Edward Collins, of New York, who with her three daughters was on the train. With 200 others they reached Paris and were taken aboard a French troop train. Most of the arrivals were women; the men were left behind because of lack of space. One hundred women refused to take the train without their husbands; scores struck back for Geneva; others on foot, carrying articles of baggage, started in the direction of Paris, hoping to get trains somewhere. just why Swiss troops thus occupied themselves is not explained; but in times of warlike turmoil many unexplainable things occur. Here is an incident of a different kind, told by one of the escaping host: âI went into the restaurant car for lunch,â he said. âWhen I tried to return to the car where Iâd left my suitcase, hat, cane and overcoat, I couldnât find it. Finally the conductor said blithely, âOh, that car was taken off for the use of the...