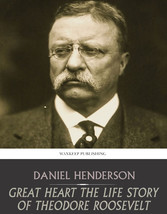 IN ROOSEVELT, THE STATESMAN, still lived âTed,â the boy. To see this fact in all its clearness one has only to let his thoughts go back to the period when Roosevelt was President and follow him on a camping expedition with his boys and their cousins, come from miles around to share in the expedition.

The beach is reached the fishing poles are put out; the catch is brought in. Thereupon Roosevelt himself turns cook. It is a big job, for there are many boys and their appetites are keen; but the cook is equal to the task. Then night steals on them. The campfire grows to enormous proportions. Around it the boys sit, listening with breathless interest to the wonder tales of hunting and cow-punching that come from the President who for his boysâ sake has made himself a lad again.

As we recall this scene we remember that the sons of Roosevelt fought for righteousness in France. We recall, too, that campfires and roughly cooked food were the order of the day in the paths these and millions of other boys traveled, and we wonder if, as they bivouacked, there did not come to them the memory of those nights when as boys their father led them out on a hard trail and then, in night-wrapped woods, stood guard over them as they rolled themselves in their blankets and fell into that sound sleep which had no room for the terrible dreams war engenders.

It is when such pictures present themselves to our minds that we say to ourselves that Bayard Taylor wrote facts as well as poetry when he said:

âThe bravest are the tenderest.

The loving are the daring!â

If a person who knew nothing of Rooseveltâs antecedents were asked to express an opinion as to the type of boy he was, that person, reasoning from Rooseveltâs great vigor and the intensity with which he threw himself into outdoor pursuits, would say that he was a strong, healthy lad.

The reverse, however, is the case. From earliest infancy Theodore Roosevelt had been subject to attacks of asthma that weakened him physically and hindered his growth. He confesses that as a little fellow he was timid, and that when larger boys strove to exercise over him that domination which the boy of an older age thinks himself privileged to exercise over a younger lad, he was backward in opposing them. It was his physical weakness that prevented him from going to school and that led him to be placed under the instruction of various tutors.

âBillâ Sewall, the old woodsman and hunter, who figures in several of Rooseveltâs books, and who, for over forty years had been a close friend of Roosevelt, said after the Colonelâs death:

âNo, Theodoreâs death did not surprise me. Men thought that he was strong and robust. He wasnât. It was his boundless energy, his determination and his nerves that kept Theodore Roosevelt turning out the enormous quantities of work he did. Really, he suffered from heart disease all his life.â

There dwelt in the boy Roosevelt an indomitable will. He also possessed a love for sports, travel and adventure such as could only be enjoyed with a strong body. Into his ken came the heroes of Captain Mayne Reidâs novels and also the heroes of Fenimore Cooperâs âLeatherstocking Tales.â He wanted to be like these men. Young as he was, he was keen enough to realize that to enter upon the career of which he dreamed he must have a sound constitution and overflowing energy. His will assumed control of his feeble body. His mind spurred his heart, limbs and lungs. He determined that the next bullying lad would have to contend with a boy with stronger muscles and heavier frame. Even as he resolved the springs of bodily vigor became loosed in the young boy. The town house became too small to hold him. Jacob Riis relates that a woman who lived next door to the Roosevelts told him that one day she saw young Theodore hanging out of a second-story window, and ran in a desperate hurry to tell his mother. What Tedâs mother said as she hurried off to rescue her son made a lasting impression on this woman: âIf the Lord had not taken care of Theodore he would have been killed long ago.â

In addition to the streets of New York beautiful Long Island was his for roving, for here his family spent the summer. He ran races with his chums; stole rides on his fatherâs mounts; swam, rowed and sailed on Long Island Sound. He explored the hills, caves and woods of his country home. He had sisters, and, of course, his sisters had girl companions, and of course he had his special friend among this group of girl playmates. Naturally, his Southern mother made it her rule to promote chivalry in her son, and so Ted played the gallant on many a picnic or horseback ride. Soon his parents saw what the doctors had failed to do the great outdoors was doing. Strong muscles came to him. He lost the fatigue which accompanied his first exertions.

His young frame broadened and grew stout enough to stand the rigors of outdoor life. Nature had had little chance with him when he was shut up in New York among his books, but now that he had come to her she gave him the rich blood and the strong nerves which later furnished him the strength to attain the fulfilment of his ambitious plans.

Ted was a sheer boy in these days, and a sheer boy he remained until he went to college. Concerning him an old Long Island stage-driver, in whose stage Ted often rode, remarked to Henry Beech Needham: âHe was a regular boy. Always outdoors, climbing trees and going bird nesting! I remember him particular, because he had queer things alive in his pockets. Sometimes it was even a snake!â

Roosevelt met âBillâ Sewall for the first time when he was eighteen years old. This was when he first came to Sewallâs hunting-camp in Maine, which is still in existence.

âBe very careful with him,â Arthur Cutler, his tutor, warned Sewall. âDonât take him on such tramps as you take yourself. He couldnât stand it. But he wouldnât let you know that for a minute. Heâd go till he dropped rather than admit it. He isnât strong, though. You must watch him carefully.â

TOOK A LOT OF WATCHING

âI did watch him carefully,â said âBillâ Sewall. âHe took a lot of watching,â he added.

âYes, a lot of watching. Heâd never quit. I remember the time we set out from my place up at Island Falls to climb Mount Katadin. Thatâs the tallest mountain we have in Maine. We were crossing Wissacataquoik Creek. The current is very swift there. Somehow Theodore lost one of his shoes. Away it went downstream. All he had with him to take the place of shoes was a pair of thin-skinned moccasins. The stones and crags on the way up cut his feet into tatters. But he kept on, with never a murmur of complaint. Thatâs a little thing, perhaps; but he was that way in all thingsâalways.â

Later, when Roosevelt had lost his first wife and also his mother, it was to Sewall, the backwoodsman who, in long walks in the Maine forests, had given him his first lessons in the value of unvarnished democracy, that he turned for solace, and it was this Maine guide who went West with him and helped to lead him out of the daze that followed these bereavements.

Rooseveltâs interest in boxing developed when he was fourteen, and rose out of the primitive need of being able to protect himself against boys who sought to impose on him. At that time he ventured forth by himself on a trip to Moosehead Lake and on the stage-coach that bore him there he met two mischievous boys of his own age who proceeded to make life miserable for him. Made desperate by their persecutions, he decided to lick them, but found that either one singly was more than a match for him.

Bitterly determined that he should not be again humiliated in this way, he resolved to learn how to defend himself, and, with his fatherâs approval, started to learn boxing.

Mr. Roosevelt himself relates how, under the training of John Long, an ex-prize-fighter, whose rooms were ornamented with vivid pictures of ring champions and battles, he first put on the gloves. For a long period he was knocked around the ring with no other fighting quality in evidence but the ability to take punishment. But then, when his boxing master arranged a series of matches, he was entered in a lightweight contest and entrusted to the care of his guardian angel.

Luckily his opponents chanced to be two youths whose ambitions greatly exceeded their science and muscular development, and, to the surprise of all concerned, he emerged the possessor of the prize cup for his classâa pewter mug that, though it would have been dear at fifty cents, was nevertheless a rich compensation for the knockdowns and bruises he had endured during his training.

In his account of Roosevelt as an outdoor man Henry Beech Needham furnishes this interesting picture of Theodore in his college days:

âIt was about to decide the lightweight championship of Harvard. The heavyweight and middleweight championships had been awarded. The contest for the men under 140 pounds was on. Roosevelt, then a junior, had defeated seven men. A senior had as many victories to his credit. They were pitted against each other in the finals. The senior was quite a bit taller than

Roosevelt and his reach was longer. He also weighed more by six pounds, but Roosevelt was the quicker man on his feet and knew more of the science of boxing. The first round was vigorously...