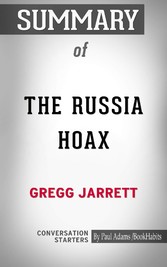 In The Russia Hoax, Fox News legal analyst Gregg Jarrett reveals the real story behind the 2016 election. There were state collaborators Barack Obama's Justice Department and FBI authorities that worked improperly to help elect Hillary Clinton and defeat Donald Trump. Their plans failed and these same people now pursue false allegations to discredit President Trump and remove him as president. Jarrett examines how Hillary Clinton escaped prosecution despite the evidence that she violated the law. He also answers if personalities like Peter Strzok, James Comey, Andrew McCabe, Loretta Lynch, and many others obstructed justice to protect Clinton. The Uranium One case will also be analyzed and answered if there was ever a legitimate criminal investigation of Clinton.Â

President Donald Trump himself tweeted that The Russia Hoax: The Illicit Scheme to Clear Hillary Clinton and Frame Donald Trump is 'a must-read.'Â

A Brief Look Inside:

than the surface of its pages. The characters and their world come alive,

and the characters and its world still live on.

Conversation Starters is peppered with questions designed to

bring us beneath the surface of the page

and invite us into the world that lives on.

These questions can be used to create hours of conversation:

• Foster a deeper understanding of the book

• Promote an atmosphere of discussion for groups

• Assist in the study of the book, either individually or corporately

• Explore unseen realms of the book as never seen before

Read it on your PC, Mac, iOS or Android smartphone, tablet devices.