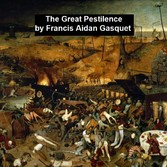 According to Wikipedia: 'The Black Death was one of the most devastating pandemics in human history, resulting in the deaths of an estimated 75 to 200 million people and peaking in Europe in the years 1346-53. Although there were several competing theories as to the etiology of the Black Death, analysis of DNA from victims in northern and southern Europe published in 2010 and 2011 indicates that the pathogen responsible was the Yersinia pestis bacterium, probably causing several forms of plague. The Black Death is thought to have originated in the arid plains of central Asia, where it then travelled along the Silk Road, reaching the Crimea by 1346.[citation needed][6] From there, it was most likely carried by Oriental rat fleas living on the black rats that were regular passengers on merchant ships. Spreading throughout the Mediterranean and Europe, the Black Death is estimated to have killed 30-60% of Europe's total population. All in all, the plague reduced the world population from an estimated 450 million down to 350-375 million in the 14th century. The aftermath of the plague created a series of religious, social, and economic upheavals, which had profound effects on the course of European history. It took 150 years for Europe's population to recover. The plague recurred occasionally in Europe until the 19th century.'