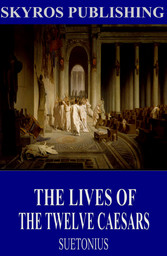 The Lives of the Twelve Caesars

The Lives of the Twelve Caesars

I. That the family of the Octavii was of the first distinction in Velitrae 106, is rendered evident by many circumstances. For in the most frequented part of the town, there was, not long since, a street named the Octavian; and an altar was to be seen, consecrated to one Octavius, who being chosen general in a war with some neighbouring people, the enemy making a sudden attack, while he was sacrificing to Mars, he immediately snatched the entrails of the victim from off the fire, and offered them half raw upon the altar; after which, marching out to battle, he returned victorious. This incident gave rise to a law, by which it was enacted, that in all future times the entrails should be offered to Mars in the same manner; and the rest of the victim be carried to the Octavii.

II. This family, as well as several in Rome, was admitted into the senate by Tarquinius Priscus, and soon afterwards placed by Servius Tullius among the patricians; but in process of time it transferred itself to the plebeian order, and, after the lapse of a long interval, was restored by Julius Caesar to the rank of patricians. The first person of the family raised by the suffrages of the people to the magistracy, was Caius Rufus. He obtained the quaestorship, and had two sons, Cneius and Caius; from whom are descended the two branches of the Octavian family, which have had very different fortunes. For Cneius, and his descendants in uninterrupted succession, held all the highest offices of the state; whilst Caius and his posterity, whether from their circumstances or their choice, remained in the equestrian order until the father of Augustus. The great-grandfather of Augustus served as a military tribune in the second Punic war in Sicily, under the command of Aemilius Pappus. His grandfather contented himself with bearing the public offices of his own municipality, and grew old in the tranquil enjoyment of an ample patrimony. Such is the account given (72) by different authors. Augustus himself, however, tells us nothing more than that he was descended of an equestrian family, both ancient and rich, of which his father was the first who obtained the rank of senator. Mark Antony upbraidingly tells him that his great-grandfather was a freedman of the territory of Thurium 107, and a rope-maker, and his grandfather a usurer. This is all the information I have any where met with, respecting the ancestors of Augustus by the fatherâs side.

III. His father Caius Octavius was, from his earliest years, a person both of opulence and distinction: for which reason I am surprised at those who say that he was a money-dealer 108, and was employed in scattering bribes, and canvassing for the candidates at elections, in the Campus Martius. For being bred up in all the affluence of a great estate, he attained with ease to honourable posts, and discharged the duties of them with much distinction. After his praetorship, he obtained by lot the province of Macedonia; in his way to which he cut off some banditti, the relics of the armies of Spartacus and Catiline, who had possessed themselves of the territory of Thurium; having received from the senate an extraordinary commission for that purpose. In his government of the province, he conducted himself with equal justice and resolution; for he defeated the Bessians and Thracians in a great battle, and treated the allies of the republic in such a manner, that there are extant letters from M. Tullius Cicero, in which he advises and exhorts his brother Quintus, who then held the proconsulship of Asia with no great reputation, to imitate the example of his neighbour Octavius, in gaining the affections of the allies of Rome.

IV. After quitting Macedonia, before he could declare himself a candidate for the consulship, he died suddenly, leaving behind him a daughter, the elder Octavia, by Ancharia; and another daughter, Octavia the younger, as well as Augustus, by Atia, who was the daughter of Marcus Atius Balbus, and Julia, sister to Caius Julius Caesar. Balbus was, by the fatherâs (73) side, of a family who were natives of Aricia 109, and many of whom had been in the senate. By the motherâs side he was nearly related to Pompey the Great; and after he had borne the office of praetor, was one of the twenty commissioners appointed by the Julian law to divide the land in Campania among the people. But Mark Antony, treating with contempt Augustusâs descent even by the motherâs side, says that his great grand-father was of African descent, and at one time kept a perfumerâs shop, and at another, a bake-house, in Aricia. And Cassius of Parma, in a letter, taxes Augustus with being the son not only of a baker, but a usurer. These are his words: âThou art a lump of thy motherâs meal, which a money-changer of Nerulum taking from the newest bake-house of Aricia, kneaded into some shape, with his hands all discoloured by the fingering of money.â

V. Augustus was born in the consulship of Marcus Tullius Cicero and Caius Antonius 110, upon the ninth of the calends of October [the 23rd September], a little before sunrise, in the quarter of the Palatine Hill 111, and the street called The Ox-Heads 112, where now stands a chapel dedicated to him, and built a little after his death. For, as it is recorded in the proceedings of the senate, when Caius Laetorius, a young man of a patrician family, in pleading before the senators for a lighter sentence, upon his being convicted of adultery, alleged, besides his youth and quality, that he was the possessor, and as it were the guardian, of the ground which the Divine Augustus first touched upon his coming into the world; and entreated that (74) he might find favour, for the sake of that deity, who was in a peculiar manner his; an act of the senate was passed, for the consecration of that part of his house in which Augustus was born.

VI. His nursery is shewn to this day, in a villa belonging to the family, in the suburbs of Velitrae; being a very small place, and much like a pantry. An opinion prevails in the neighbourhood, that he was also born there. Into this place no person presumes to enter, unless upon necessity, and with great devotion, from a belief, for a long time prevalent, that such as rashly enter it are seized with great horror and consternation, which a short while since was confirmed by a remarkable incident. For when a new inhabitant of the house had, either by mere chance, or to try the truth of the report, taken up his lodging in that apartment, in the course of the night, a few hours afterwards, he was thrown out by some sudden violence, he knew not how, and was found in a state of stupefaction, with the coverlid of his bed, before the door of the chamber.

VII. While he was yet an infant, the surname of Thurinus was given him, in memory of the birth-place of his family, or because, soon after he was born, his father Octavius had been successful against the fugitive slaves, in the country near Thurium. That he was surnamed Thurinus, I can affirm upon good foundation, for when a boy, I had a small bronze statue of him, with that name upon it in iron letters, nearly effaced by age, which I presented to the emperor 113, by whom it is now revered amongst the other tutelary deities in his chamber. He is also often called Thurinus contemptuously, by Mark Antony in his letters; to which he makes only this reply: âI am surprised that my former name should be made a subject of reproach.â He afterwards assumed the name of Caius Caesar, and then of Augustus; the former in compliance with the will of his great-uncle, and the latter upon a motion of Munatius Plancus in the senate. For when some proposed to confer upon him the name of Romulus, as being, in a manner, a second founder of the city, it was resolved that he should rather be called Augustus, a surname not only new, but of more dignity, because places devoted to religion, and those in which anything (75) is consecrated by augury, are denominated august, either from the word auctus, signifying augmentation, or ab avium gestu, gustuve, from the flight and feeding of birds; as appears from this verse of Ennius:

When glorious Rome by august augury was built. 114

VIII. He lost his father when he was only four years of age; and, in his twelfth year, pronounced a funeral oration in praise of his grand-mother Julia. Four years afterwards, having assumed the robe of manhood, he was honoured with several military rewards by Caesar in his African triumph, although he took no part in the war, on account of his youth. Upon his uncleâs expedition to Spain against the sons of Pompey, he was followed by his nephew, although he was scarcely recovered from a dangerous sickness; and after being shipwrecked at sea, and travelling with very few attendants through roads that were infested with the enemy, he at last came up with him. This activity gave great satisfaction to his uncle, who soon conceived an increasing affection for him, on account of such indications of character. After the subjugation of Spain, while Caesar was meditating an expedition against the Dacians and Parthians, he was sent before him to Apollonia, where he applied himself to his studies; until receiving intelligence that his uncle was murdered, and that he was appointed his heir, he hesitated for some time whether he should call to his aid the legions stationed in the neighbourhood; but he abandoned the design as rash and premature. However, returning to Rome, he took possession of his inheritance, although his mother was apprehensive that such a measure might be attended with danger, and his step-father, Marcius Philippus, a man of consular rank, very earnestly dissuaded him from it....