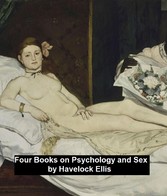 Four Books on Psychology and Sex

Four Books on Psychology and Sex

This file includes: The Task of Social Hygiene, Essays in War-Time: Further Studies in the Task of Social Hygiene, Impressions and Comments, and Little Essays of Love and Virtue. According to Wikipedia: 'Henry Havelock Ellis (2 February 1859 - 8 July 1939) was a British sexologist, physician, and social reformer. In April 1875, Ellis left London on his father's ship for Australia, and soon after his arrival in Sydney, he obtained a position as a master at a private school. It was discovered that he had had no training for this position, and so he became a tutor for a family living a few miles from Carcoar. He spent a year there, doing a lot of reading, and then obtained a position as a master at a grammar school in Grafton. The headmaster had died and Ellis carried on the school for that year, but was too young and inexperienced to do so successfully. At the end of the year, he returned to Sydney and, after three months' training, was given charge of two government part-time elementary schools, one at Sparkes Creek and the other at Junction Creek. He lived at the school house on Sparkes Creek for a year, which turned out to be the most eventful year of his life up to that point, as he called it afterwards. In his own words, 'In Australia, I gained health of body, I attained peace of soul, my life task was revealed to me, I was able to decide on a professional vocation, I became an artist in literature . . . these five points covered the whole activity of my life in the world. Some of them I should doubtless have reached without the aid of the Australian environment, scarcely all, and most of them I could never have achieved so completely if chance had not cast me into the solitude of the Liverpool Range.' Ellis returned to England in April 1879. He had decided to take up the study of sex, and felt his first step must be to qualify as a medical man. He studied at St Thomas's Hospital Medical School, but never had a regular medical practice.'