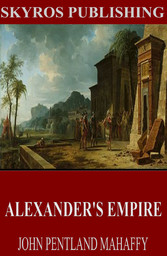 NO MODERN GENERAL COULD POSSIBLY have started on a campaign with the means at Alexanderâs disposal. He had indeed a splendid army of all branches, heavy infantry, light infantry, slingers and archers, artillery such as the ancients could produce without gunpowder and cavalry, both Thessalian and Macedonian, fit for both skirmishing and the shock of battle. If its numbers were not above 40,000, this moderate force was surely as much as any commander could handle in a rapid campaign with long marches through a hostile country. Ancient authors, who were mostly pedants knowing nothing of war, speak as if two or three hundred thousand men could be marched across a continent without trouble. Xerxes was even supposed to have led some millions into Greece. But all this is absurd, and we know very well that as the commissariat and appointments of more than 40,000 men, marching great distances through strange country, would tax the ablest modern Quartermaster-General, with railroads to help him, so any larger army would have been simply useless to Alexander. He had already secured his passage into Asia by means of the troops which Philip had sent to the Hellespont and the Troad just before his death; but he had no large fleet, and the warships of Phoenicia would have effectually stopped him, had he delayed. This was another reason for collecting no huge army, and it was very well known that a small number of disciplined troops, such as the Greek troops of Xenophon or Agesilaus, were as well able to meet myriads of barbarians, as the victors of Plassy or Assaye to win their victories under very like circumstances.

After a Homeric landing on the coast near Ilium and sacrifices to the Ilian goddess at her ancient shrine, with feasts and games, the king started East to meet the Persian satraps, who had collected their cavalry and Greek mercenary infantry on the plain of Zeleia, behind the river Granicus (B.C. 334). Here he fought his first great battle, and showed the nature of his tactics. He used his heavy infantry, divided into two columns or phalanxes as his left wing, flanked by Thessalian cavalry, to threaten the right of the enemy, and keep him engaged while he delivered his main attack. Developing this movement by a rapid advance in echeloned squadrons thrown forward to the right, threatening to outflank the enemy, he induced them to spread their forces towards their left wing, and so weaken their left centre. No sooner had he succeeded in this than he threw his heavy cavalry on this weak point, and after a very severe struggle in crossing the river, and climbing its rugged banks, he completely broke the enemyâs line. The Persian nobles did all they could to retrieve their mistake; they threw themselves into the gap, and fought heroically with Alexander and his companions; it seemed a mere accident that they did not succeed in killing him, and so altering the worldâs history. Here was indeed a distinct fault in his tactics; he constantly and recklessly exposed his own life, and so risked the whole campaign on the chance of his own escape. For though he was an excellent soldier, active, strong, and highly trained, delighting in the excitement of a hand-to-hand struggle, and so affording a fine example to his officers, it is agreed that the guiding spirit should not involve itself more than is necessary in the heat and turmoil, as well as the great risk, of personal combat.

We cannot undertake to give the details of Alexanderâs campaigns, which would in themselves fill this volume, and for ordinary readers they are not worth remembering. We shall merely follow out the leading points.

He did not strike straight into Asia, for this would have left it possible for Mentor and Memnon, the able Rhodians who commanded on the coast for Darius, either to have raised all Asia Minor against him, or to have transferred the war back to Macedon. Indeed, this was the policy which they urged on the Persian nobles, but it was put aside as the plan of shabby Greeks, and not of chivalrous Aryan barons; for the Persians were far more like the mediaeval knights and barons than any Greeks, even the noblest, and looked upon them merely as so many useful mercenaries, to fight infantry battles, while the aristocratic service was the cavalry. In this respect the Persians were far nearer the Macedonians in sentiment and we may be sure they so far enlisted Alexanderâs sympathy. However the policy of Memnon was cautious and wise and we see that the king knew it, for he left pursuing the beaten force, and turned south to subdue the coasts of the Persian Empire. This would prevent their superior fleet not only from landing on his rear, but from acting on Greece and Macedon, for ancient fleets required not only land supplies, but harbors to stay in; they could not lie out at sea like our men of war and for this purpose even the islands of the Levant were insufficient. So then he seized Sardis, the key of all the highroads eastwards; he laid siege to Halicarnassus which made a very long and stubborn resistance, and did not advance till he had his rear safe from attack.

Even with all these precautions, the Persian fleet, under Memnon, was producing serious difficulties and had not that able general died at the critical moment (B.C. 333), the Spartan revolt, which was put down the following year in Greece, would have assumed serious proportions. Alexander now saw that he could press on, and strike at the headquarters of the enemiesâ powerâPhoenicia and the Great king himself He crossed the difficult range of the Taurus, the southern bulwark of the Persian Empire and occupied Cilicia. Even the sea was supposed to have retreated to allow his army to pass along a narrow strand under precipitous cliffs. The Great king was awaiting him with a vast armyâgrossly exaggerated, moreover, in our Greek accountsâin the plain of Syria, near Damascus. Foolish advisers persuaded him, owing to some delay in Alexanderâs advance, to leave his favorable position, where the advantage of his hosts of cavalry was clear. He therefore actually crossed Alexander, who had passed on the sea side of Mount Amanus, southward and occupied Issus on his rear. The Macedonian army was thus cut off from home and a victory necessary to its very existence. The great battle of Issus was fought on such narrow ground between the sea and the mountains, that neither side had room for outflanking its opponent, except by occupying the high ground on the inland side of the plain (B.C. 333). This was done by the Persians and the banks of a little river (the Pinarus) crossing their front was fortified as at the Granicus Alexander was obliged to advance with a large reserve to protect his right flank. As usual he attacked with his right centre, and as soon as he had shaken the troops opposed to him, wheeled to the left and made straight for the king himself, who occupied the centre in his chariot. Had Darius withstood him bravely and for some time, the defeat of the Macedoniansâ left wing would probably have been complete, for the Persian cavalry on the coast, attacking the Thessalians on Alexanderâs left wing, were decidedly superior, and the Greek infantry was at this time a match for the phalanx. But the flight of Darius, and the panic which ensued about him, left Alexander leisure to turn to the assistance of his hard-pressed left wing, and recover the victory.

It may be mentioned here, as it brings the facts together for the reader, that the very same thing took place at Arbela, the next and last great battle for the supremacy of the world at that crisis. There, too, while Alexanderâs feint at outflanking the enemyâs left, and his furious charge upon the king in the centre, was successful, his left wing was broken, and in danger of complete destruction. It was only his timely charge on the rear of the attacking force which saved Parmenioâs phalanx. So true is it that Alexander has ever won a battle with his phalanx. He saw at once that Persian discipline was not such as could bear the defeat or death of the king. Therefore a charge in close squadrons of heavy cavalry, if brought to bear at the proper moment and after the enemyâs line has been weakened or disturbed by maneuvering, was certain to give him the victory.

At Issus, too, the Persian grandees showed a loyalty equal to any instance in the days of mediaeval chivalry, and sacrificed their lives freely in defense of their pusillanimous king. In this battle, too, Alexander committed the fault of risking his personâhe was actually woundedâby way of contrast to his opponent.

The greatness of this victory completely paralyzed all the revolt prepared in his rear by the Persian fleet. Alexander was now strong enough to go on without any base of operation, and he boldly (in the manifesto he addressed to Darius after the battle) proclaimed himself King of Persia by right of conquest, who would brook no equal. Nevertheless, he delayed many months (which the siege of Tyre cost him, B.C. 332) and then, passing through Jerusalem, and showing consideration for the Jews, he again paused at the siege of Gaza, merely, we may suppose, to prove that he was invincible, and to settle once for all the question of the worldâs mastery. He delayed again for a short while in Egypt, when he regulated the country as a province under his sway, with kindness towards the inhabitants, and respect for their religion, and founded Alexandria; nay, he even here made his first essay in claiming divinity; and then, at last, set out to conquer the Eastern provinces of Dariusâ empire.

The great decisive battle in the...