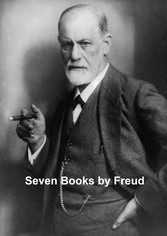 We have not studied the problem of errors in vain. Thanks to our efforts in this field, under the conditions known to you, we have evolved two different things, a conception of the elements of the dream and a technique for dream interpretation. The conception of the dream element goes to show something unreal, a substitute for something else, unknown to the dreamer, similar to the tendency of errors, a substitute for something the dreamer knows but cannot approach. We hope to transfer the same conception to the whole dream, which consists of just such elements. Our method consists of calling up, by means of free associations, other substitute formations in addition to these elements, from which we divine what is hidden.

Let me ask you to permit a slight change in our nomenclature which will greatly increase the flexibility of our vocabulary. Instead of hidden, unapproachable, unreal, let us give a truer description and say inaccessible or unknown to the consciousness of the dreamer. By this we mean only what the connection with the lost word or with the interfering intention of the error can suggest to you, namely, unconscious for the time being. Naturally in contrast to this we may term conscious the elements of the dream itself and the substitute formations just gained by association. As yet there is absolutely no theoretical construction implied in this nomenclature. The use of the word unconscious as a suitable and intelligible descriptive epithet is above criticism.

1. What the dream seems to say, whether it be sensible or absurd, clear or confused is not our concern, since it can under no condition be that unconscious content we are seeking. Later we shall have to observe an obvious limitation of this rule. 2. The awakening of substitute formations for each element shall be the sole object of our work. We shall not reflect on these, test their suitability or trouble how far they lead away from the element of the dream. 3. We shall wait until the hidden unconscious we are seeking appears of itself, as the missing word Monaco in the experiment which we have described.

Now we can understand, too, how unimportant it is how much, how little, above all, how accurately or how indifferently the dream is remembered. For the dream which is remembered is not the real one, but a distorted substitute, which is to help us approach the real dream by awakening other substitute formations and by making the unconscious in the dream conscious. Therefore if our recollection of the dream was faulty, it has simply brought about a further distortion of this substitute, a distortion which cannot, however, be unmotivated.

One can interpret one's own dreams as well as those of others. One learns even more from these, for the process yields more proof. If we try this, we observe that something impedes the work. Haphazard ideas arise, but we do not let them have their way. Tendencies to test and to choose make themselves felt. As an idea occurs, we say to ourselves "No, that does not fit, that does not belong here"; of a second "that is too senseless"; of a third, "this is entirely beside the point"; and one can easily observe how the ideas are stifled and suppressed by these objections, even before they have become entirely clear. On the one hand, therefore, too much importance is attached to the dream elements themselves; on the other, the result of free association is vitiated by the process of selection. If you are not interpreting the dream alone, if you allow someone else to interpret it for you, you will soon discover another motive which induces you to make this forbidden choice. At times you say to yourself, "No, this idea is too unpleasant, I either will not or cannot divulge this."

Clearly these objections are a menace to the success of our work. We must guard against them, in our own case by the firm resolve not to give way to them; and in the interpretation of the dreams of others by making the hard and fast rule for them, never to omit any idea from their account, even if one of the following four objections should arise: that is, if it should seem too unimportant, absurd, too irrelevant or too embarrassing to relate. The dreamer promises to obey this rule, but it is annoying to see how poorly he keeps his promise at times. At first we account for this by supposing that in spite of the authoritative assurance which has been given to the dreamer, he is not impressed with the importance of free association, and plan perhaps to win his theoretic approval by giving him papers to read or by sending him to lectures which are to make him a disciple of our views concerning free association. But we are deterred from such blunders by the observation that, in one's own case, where convictions may certainly be trusted, the same critical objections arise against certain ideas, and can only be suppressed subsequently, upon second thought, as it were.

Instead of becoming vexed at the disobedience of the dreamer, these experiences can be turned to account in teaching something new, something which is the more important the less we are prepared for it. We understand that the task of interpreting dreams is carried on against a certain resistance which manifests itself by these critical objections. This resistance is independent of the theoretical conviction of the dreamer. Even more is apparent. We discover that such a critical objection is never justified. On the contrary, those ideas which we are so anxious to suppress, prove without exception to be the most important, the most decisive, in the search for the unconscious. It is even a mark of distinction if an idea is accompanied by such an objection.

This resistance is something entirely new, a phenomenon which we have found as a result of our hypotheses although it was not originally included in them. We are not too pleasantly surprised by this new factor in our problem. We suspect that it will not make our work any easier. It might even tempt us to abandon our entire work in connection with the dream. Such an unimportant thing as the dream and in addition such difficulties instead of a smooth technique! But from another point of view, these same difficulties may prove fascinating, and suggest that the work is worth the trouble. Whenever we try to penetrate to the hidden unconscious, starting out from the substitute which the dream element represents, we meet with resistance. Hence, we are justified in supposing that something of weight must be hidden behind the substitute. What other reason could there be for the difficulties which are maintained for purposes of concealment? If a child does not want to open his clenched fist, he is certainly hiding something he ought not to have.

Just as soon as we bring the dynamic representation of resistance into our consideration of the case, we must realize that this factor is something quantitatively variable. There may be greater or lesser resistances and we are prepared to see these differences in the course of our work. We may perhaps connect this with another experience found in the work of dream interpretation. For sometimes only one or two ideas serve to carry us from the dream element to its unconscious aspect, while at other times long chains of associations and the suppression of many critical objections are necessary. We shall note that these variations are connected with the variable force of resistance. This observation is probably correct. If resistance is slight, then the substitute is not far removed from the unconscious, but strong resistance carries with it a great distortion of the unconscious and in addition a long journey back to it.

Perhaps the time has come to take a dream and try out our method to see if our faith in it shall be confirmed. But which dream shall we choose? You cannot imagine how hard it is for me to decide, and at this point I cannot explain the source of the difficulty. Of course, there must be dreams which, as a whole, have suffered slight distortion, and it would be best to start with one of these. But which dreams are the least distorted? Those which are sensible and not confused, of which I have already given you two examples? This would be a gross misunderstanding. Testing shows that these dreams have suffered by distortion to an exceptionally high degree. But if I take the first best dream, regardless of certain necessary conditions, you would probably be very much disappointed. Perhaps we should have to note such an abundance of ideas in connection with single elements of dream that it would be absolutely impossible to review the work in perspective. If we write the dream out and confront it with the written account of all the ideas which arise in connection with it, these may easily amount to a reiteration of the text of the dream. It would therefore seem most practical to choose for analysis several short dreams of which each one can at least reveal or confirm something. This is what we shall decide upon, provided...