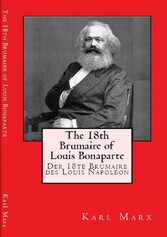 Under the bourgeois monarchy of Louis Philippe it had formed the official republican opposition and consequently a recognized component part of the political world of the day. It had its representatives in the Chambers and a considerable sphere of influence in the press. Its Paris organ, the National, was considered just as respectable in its way as theJournal des DÃ©bats. Its character corresponded to this position under the constitutional monarchy. It was not a faction of the bourgeoisie held together by great common interests and marked off by specific conditions of production. It was a clique of republican-minded bourgeois, writers, lawyers, officers, and officials that owed its influence to the personal antipathies of the country to Louis Philippe, to memories of the old republic, to the republican faith of a number of enthusiasts, above all, however, to French nationalism, whose hatred of the Vienna treaties12 and of the alliance with England it stirred up perpetually.

A large part of the following the National had under Louis Philippe was due to this concealed imperialism, which could consequently confront it later, under the republic, as a deadly rival in the person of Louis Bonaparte. It fought the aristocracy of finance, as did all the rest of the bourgeois opposition. Polemics against the budget, which in France were closely connected with fighting the aristocracy of finance, procured popularity too cheaply and material for puritanical leading articles too plentifully not to be exploited. The industrial bourgeoisie was grateful to it for its slavish defense of the French protectionist system, which it accepted, however, more on national grounds than on grounds of national economy; the bourgeoisie as a whole, for its vicious denunciation of communism and socialism. For the rest, the party of the National was purely republican; that is, it demanded a republican instead of a monarchist form of bourgeois rule and, above all, the lionâs share of this rule. About the conditions of this transformation it was by no means clear in its own mind.

On the other hand, what was clear as daylight to it, and was publicly acknowledged at the reform banquets in the last days of Louis Philippe, was its unpopularity with the democratic petty bourgeois, and in particular with the revolutionary proletariat. These pure republicans, as is indeed the way with pure republicans, were already at the point of contenting themselves in the first instance with a regency of the Duchess of Orleans13 when the February Revolution broke out and assigned their best-known representatives a place in the Provisional Government. From the start they naturally had the confidence of the bourgeoisie and a majority in the Constituent National Assembly.

The socialist elements of the Provisional Government were excluded forthwith from the Executive Commission which the National Assembly formed when it met, and the party of the National took advantage of the outbreak of the June insurrection to discharge the Executive Commission14 also, and therewith to get rid of its closest rivals, the petty-bourgeois, or democratic, republicans (Ledru-Rollin, etc.). Cavaignac, the general of the bourgeois-republican part who commanded the June massacre, took the place of the Executive Commission with a sort of dictatorial power. Marrast, former editor in chief of the National, became the perpetual president of the Constituent National Assembly, and the ministries, as well as all other important posts, fell to the portion of the pure republicans.

The republican bourgeois faction, which had long regarded itself as the legitimate heir of the July Monarchy, thus found its fondest hopes exceeded; it attained power, however, not as it had dreamed under Louis Philippe, through a liberal revolt of the bourgeoisie against the throne, but through a rising of the proletariat against capital, a rising laid low with grapeshot. What it had conceived as the most revolutionary event turned out in reality to be the most counterrevolutionary. The fruit fell into its lap, but it fell from the tree of knowledge, not from the tree of life.

The exclusive rule of the bourgeois republicans lasted only from June 24 to December 10, 1848. It is summed up in the drafting of a republican constitution and in the state of siege of Paris.

The new constitution was at bottom only the republicanized edition of the constitutional Charter of 1830.15 The narrow electoral qualification of the July Monarchy, which excluded even a large part of the bourgeoisie from political rule, was incompatible with the existence of the bourgeois republic. In lieu of this qualification, the February Revolution had at once proclaimed direct universal suffrage. The bourgeois republicans could not undo this event. They had to content themselves with adding the limiting proviso of a six monthsâ residence in the constituency. The old organization of the administration, the municipal system, the judicial system, the army, etc., continued to exist inviolate, or, where the constitution changed them, the change concerned the table of contents, not the contents; the name, not the subject matter.

The inevitable general staff of the liberties of 1848, personal liberty, liberty of the press, of speech, of association, of assembly, of education and religion, etc., received a constitutional uniform which made them invulnerable. For each of these liberties is proclaimed as the absolute right of the French citoyen, but always with the marginal note that it is unlimited so far as it is not limited by the âequal rights of others and the public safetyâ or by âlawsâ which are intended to mediate just this harmony of the individual liberties with one another and with the public safety. For example:

âThe citizens have the right of association, of peaceful and unarmed assembly, of petition and of expressing their opinions, whether in the press or in any other way. The enjoyment of these rights has no limit save the equal rights of others and the public safety.â

âEducation is free. Freedom of education shall be enjoyed under the conditions fixed by law and under the supreme control of the state.â

âThe home of every citizen is inviolable except in the forms prescribed by law.â

The constitution, therefore, constantly refers to future organic laws which are to put into affect those marginal notes and regulate the enjoyment of these unrestricted liberties in such manner that they will collide neither with one another nor with the public safety. And later these organic laws were brought into being by the friends of order and all those liberties regulated in such manner that the bourgeoisie in its enjoyment of them finds itself unhindered by the equal rights of the other classes. Where it forbids these liberties entirely to âthe others,â or permits enjoyment of them under conditions that are just so many police traps, this always happens solely in the interest of âpublic safetyâ â that is, the safety of the bourgeoisie â as the constitution prescribes.

In the sequel, both sides accordingly appeal with complete justice to the constitution: the friends of order, who abrogated all these liberties, as well as the democrats, who demanded all of them. For each paragraph of the constitution contains its own antithesis, its own upper and lower house, namely, liberty in the general phrase, abrogation of liberty in the marginal note. Thus so long as the name of freedom was respected and only its actual realization prevented, of course in a legal way, the constitutional existence of liberty remained intact, inviolate, however mortal the blows dealt to its existence in actual life.

This constitution, made inviolable in so ingenious a manner, was nevertheless, like Achilles, vulnerable in one point â not in the heel, but in the head, or rather in the two heads it wound up with: the Legislative Assembly on the one hand, the President on the other. Glance through the constitution and you will find that only the paragraphs in which the relationship of the President to the Legislative Assembly is defined are absolute, positive, noncontradictory, and cannot be distorted. For here it was a question of the bourgeois republicans safeguarding themselves.

On one side are seven hundred and fifty representatives of the people, elected by universal suffrage and eligible for re-election; they form an uncontrollable, indissoluble,...