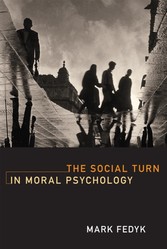 In this book, Mark Fedyk offers a novel analysis of the relationship between moral psychology and allied fields in the social sciences. Fedyk shows how the social sciences can be integrated with moral philosophy, argues for the benefits of such an integration, and offers a new ethical theory that can be used to bridge research between the two. Fedyk argues that moral psychology should take a social turn, investigating the psychological processes that motivate patterns of social behavior defined as ethical using normative information extracted from the social sciences. He points out methodological problems in conventional moral psychology, particularly the increasing methodological and conceptual inconsilience with both philosophical ethics and evolutionary biology. Fedyk's 'causal theory of ethics' is designed to provide moral psychology with an ethical theory that can be used without creating tension between its scientific practice and the conceptual vocabulary of philosophical ethics. His account aims both to redirect moral psychology toward more socially realistic questions about human life and to introduce philosophers to a new form of ethical naturalism -- a way of thinking about how to use different fields of scientific research to answer some of the traditional questions that are at the heart of ethics.