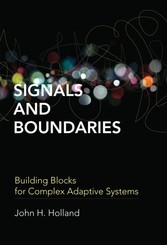 Complex adaptive systems (cas), including ecosystems, governments, biological cells, and markets, are characterized by intricate hierarchical arrangements of boundaries and signals. In ecosystems, for example, niches act as semi-permeable boundaries, and smells and visual patterns serve as signals, governments have departmental hierarchies with memoranda acting as signals, and so it is with other cas. Despite a wealth of data and descriptions concerning different cas, there remain many unanswered questions about &quote,steering&quote, these systems. In Signals and Boundaries, John Holland argues that understanding the origin of the intricate signal/border hierarchies of these systems is the key to answering such questions. He develops an overarching framework for comparing and steering cas through the mechanisms that generate their signal/boundary hierarchies.Holland lays out a path for developing the framework that emphasizes agents, niches, theory, and mathematical models. He discusses, among other topics, theory construction, signal-processing agents, networks as representations of signal/boundary interaction, adaptation, recombination and reproduction, the use of tagged urn models (adapted from elementary probability theory) to represent boundary hierarchies, finitely generated systems as a way to tie the models examined into a single framework, the framework itself, illustrated by a simple finitely generated version of the development of a multi-celled organism, and Markov processes.