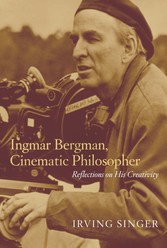 Known for their repeating motifs and signature tropes, the films of Ingmar Bergman also contain extensive variation and development. In these reflections on Bergman's artistry and thought, Irving Singer discerns distinctive themes in Bergman's filmmaking, from first intimations in the early work to consummate resolutions in the later movies. Singer demonstrates that while Bergman's output is not philosophy on celluloid, it attains an expressive and purely aesthetic truthfulness that can be considered philosophical in a broader sense. Through analysis of both narrative and filmic effects, Singer probes Bergman's mythmaking and his reliance upon the magic inherent in his cinematic techniques. Singer traces throughout the evolution of Bergman's ideas about life and death, and about the possibility of happiness and interpersonal love. In the overtly self-referential films that he wrote or directed (The Best Intentions, Fanny and Alexander, Sunday's Children) as well as the less obviously autobiographical ones (including Wild Strawberries, The Seventh Seal, and the triad that begins with Through a Glass Darkly) Bergman investigates problems in his existence and frequently reverts to childhood memories. In such movies as Smiles of a Summer Night, Scenes from a Marriage, and Saraband, Bergman draws upon his mature experience and depicts the troubled relationships between men who are often weak and women who are made to suffer by the damaged men with whom they live. In Persona, Cries and Whispers, and other works, his experiments with the camera are uniquely masterful. Inspecting the panorama of Bergman's art, Singer shows how the endless search for human contact motivates the content of his films and reflects Bergman's profound perspective on the world.